The clocks went back last night.  I have made full use of the extra hour.  This morning I used it to have a cup of tea in bed with Mr Clicky before he headed off for Stuttgart on business.  Then I used it to watch Master Clicky play is first rugby game this year for the new Colts team (Under 18s even though he's 16.)  Then I used it to do the massive pile of ironing that had grown from seemingly nowhere.  Then I used it to watch the Rugby World Cup quarter final.  Now I'm using for this blog post.  That's what I call good value.

It's half term at school and the half term lurgy struck me a week earlier this year.  I'm feeling much better now than I was last week, which, I suppose isn't a bad thing.

Autumn is well and truly upon us,  the trees in the field opposite the rugby pitch have started to change their leaf colours 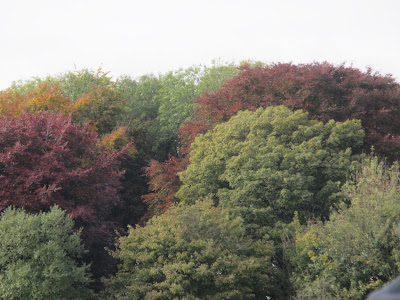 and we've had our first fire too.   Mr and Master Clicky went out with the chainsaw and chopped up some pallets which I had accumulated, wood for free, not bad. 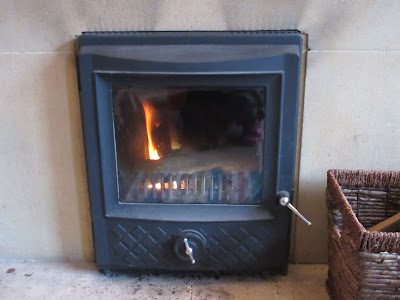 All perfect for getting nice and cosy and knitting.
I've finished my Sparkly Bolero and Maisie was happy to model. 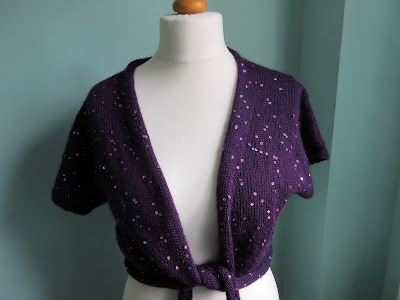 I've cast on a new cardi.  I'm using Rowan Wool Aran, bought in a sale several years ago.   I used the bulk of it to make a garter stitch cardi which I never wore as I just didn't like it.  It lived in my wardrobe for several (3/4?) years and suffered from an attack of the moths.  So did the grey jacket underneath.  Anyhoo both have spent quite some time in the freezer and I'm reusing the yarn. 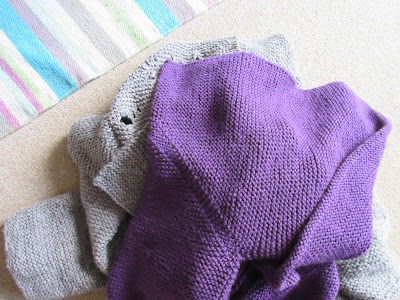 At the moment I am using some unused balls but I will have to use the curly stuff too. 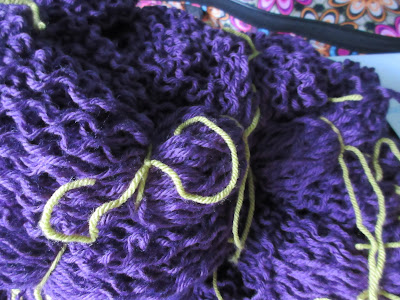 Here's the pattern.  It's called Isis Tailcoat but for fear of men in dark suits turning up I'm renaming it Purple Tailcoat.  It has an interesting construction, the bottom 'skirt' bit is knit first and then the back and side seam picked up and knit upwards.  I had finished the skirt and then realised it would look a lot better if if had a provisional cast on and then the seam that you can see on the right hand side of the picture wouldn't be there.  I tried casting off the left side and then picking up, but that didn't really work, so the only thing for it is to start again with a provisional cast on. 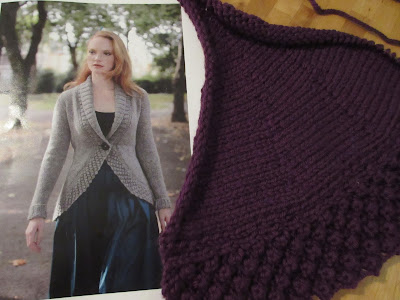 Mr Clicky was a bit horrified when I told him I was starting again but there's no point in making something unless I'm happy with it, is there?

I'm planning to get my sewing machine out this week coming, and to have a think about Christmas things.  I've signed up to The Twelve Days of Christmas Swap run by Jo at Through The Keyhole so I need to get cracking.

I've also signed up to Amy's Christmas Card Swap which I did last year and was good fun.  Sign ups are open until 16th November if you fancy taking part.

That's me for now, and great news! no alarm to wake me up tomorrow.