Mr Clicky and Me have returned from our week in France.  We did lots of work on the house but there is still lots to do!

The school holidays are over, only one more day and I'm back to work.  It was hot in France, into the high 20s but even there that August feel was about.  Cooler mornings and early evenings.  Things on the turn.

My cultivated blackberry has been fruiting well, the berries are going into the freezer for a winter blackberry and apple crumble. 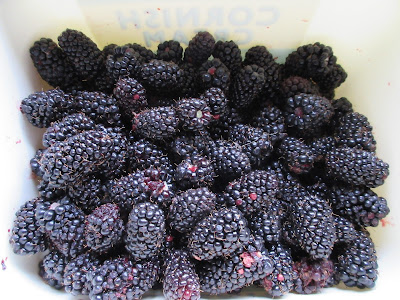 I have been making things over the holiday too.  Mr Clicky and I made this bonkers little table out of a pallet we had.  It took a few hours and we quite enjoyed it.  It sits on the patio next to my steamer chair.   Mr Clicky named it the 'knitting table' straight away. 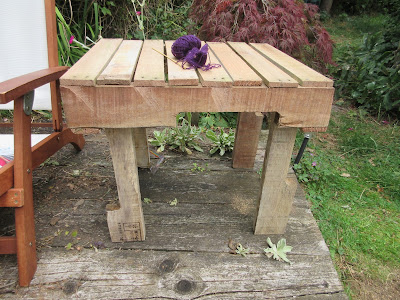 The knitting you can see on top of it is a bolero made with King Cole Galaxy yarn. 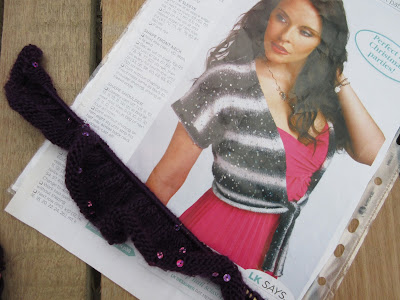 The yarn was gifted to me by my lovely friend Romain and I thought it would be a good car knitting project whilst driving through France. 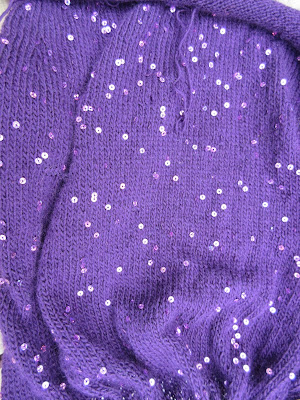 I've also hooked on a new crochet twine bag.  I was eating Tooty Fruities at the same time 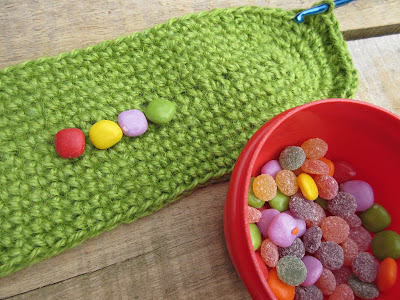 so it shall be called my Tooty Fruity Bag. 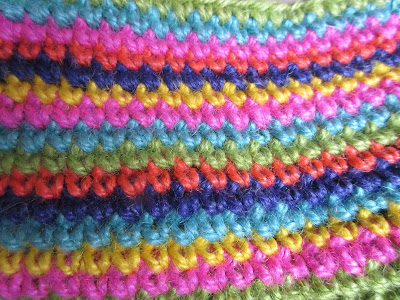 I came across this on Pinterest from the Quilt While You're Ahead blog ~  I'm spending lots of time on Pinterest at the moment ~ anyhoo the colours of the bag stopped me in my tracks.  I made a special trip to a local garden centre to buy the colours of twine I din't have.  To be fair I have lots of twine in quite a few colours but I didn't have aqua, orange or yellow.  I have made twine bags in the past but with a large hook and double thread.  I love working with twine, I love the smell of it ~ I know, I'm weird ~ it's not as hard on the hands as you might think, and the results are very durable.

Long time no post from me.  I've been to France for a week and been pottering around at home, which has been great, but the holidays seem to be disappearing fast.

As I have time on my hands I've been Behind The Sofa.  Well not so much behind the sofa, as in the basket, under the table next to the sofa.  We've all got that bit of space where we hastily shove our knitting bag when someone pops by, and I'm afraid my half finished projects get shoved there too.  I decided it was time to hoover all the cobwebs and other nasties.  I also took the opportunity to have a look through the bags of half finished knitting.

Firstly we have a Fair Isle mitten.  This was a pattern cobbled together from a glove and a mitten.  Started in 2010.  Frogged. 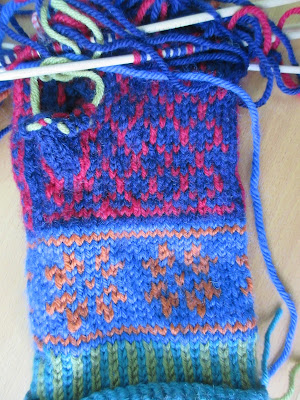 A toe up sock.  Not very exciting, I've had the needles out for other, more exciting socks, hence the reason there are only two.  Started October 2010.  Not frogged but not that promising either. 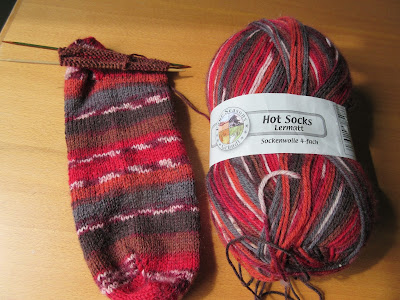 The Blanket I'm Not Allowed To Make.  This was started 1st January 2013.  It will be on-going.  Mr Clicky was not happy about this, "Do we really need another blanket?"  It'll go in my shed, when he builds it for me ~ that may be a pipe dream. 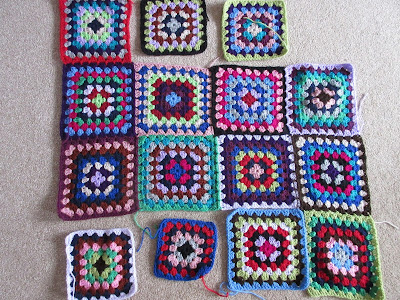 Flip Top Gloves.  A mash up of two patterns, with the flip-top bit not working that well. I think I'll take off the flip bit and knit the fingers all the way.  I wasn't even sure what pattern I had used until I looked on good old Ravelry.  Started December 31 2010. 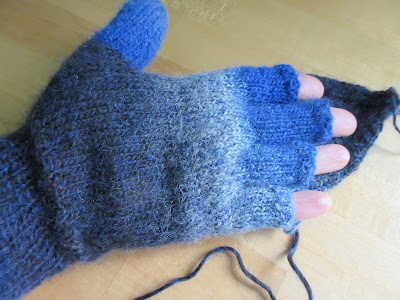 Blender Socks.  Using up all the tiny pieces of sock yarn that I can't bear to throw away.  I still have loads of sock yarn, it must multiply in the bag.  Lots of ends to sew in but I still like the effect.  Have no idea when this was started.  Staying on the needles. 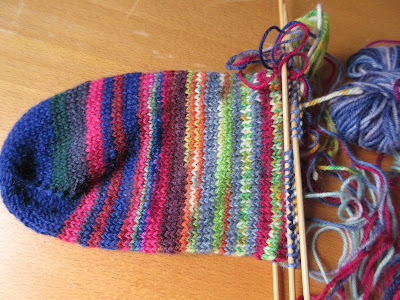 And now onto the big stuff.
My Fabulous Stripy Cardi.  Started March 2014.  Drops Alpaca and Drops Delight.  Gorgeous combination.  Not off to an easy start, had to frog some and redo.  I got bored of knitting the sleeves in the round.  Will be picking up again. 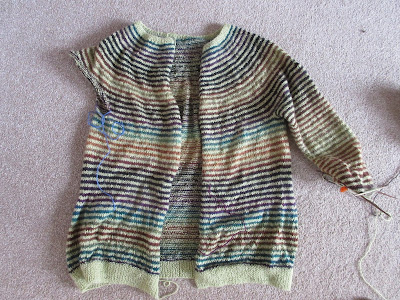 Leaf Aran Started October 2012.  A lovely aran but the moss stitch on the back gave me aching arms and wrists.  That said, I've finished the back which is the main bit of moss stitch, must pick it up again. 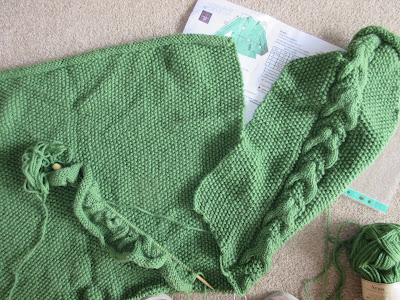 Tamari Started October 2013.  Love the pattern, love the yarn, just not the two together.  Frogged. 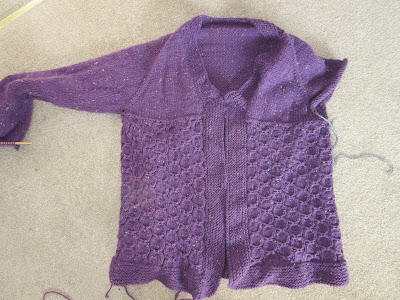 And lastly two little tapestries that need stretching/framing/making into a cushion/something doing with them.   Miss Clicky made the heart, I did the cockerel.  They have been in the basket for 5 years plus. 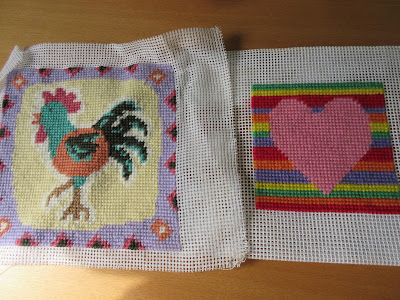 These are old projects of course, this doesn't include my Daybreak Shawl (nearly finished) and a bolero that I started the other week for car knitting whilst driving in France.  You can have a peek at that next time.

So there we are, I do try to only have two things on the go at once, and I shall endeavour to do so in the future.  Is it any tidier in the basket, under the table?  Slightly, but if I'm honest, not really.