Carrying on the theme of things changing, I worked my last day at school last week.  I decided with Mr Clicky that I needed a bit of time to get things in order before I upsticks for Chicagoland.  There's lots to be done and I have even started making lists ~ which is most unlike me ~ of 'stuff' that need to be attended to.

My last day was emotional, I have been at school for 16 years.  The children had made me a book of memories, drawn pictures of me, made, along with the help of some wonderful mums, a quilt with a block from each child 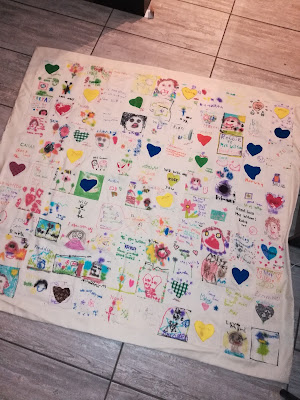 and even written a poem.  I won't bore you with it all but the first verse goes,
Mrs W has curly hair
She can give you a scary stare
But we know you really care
We're going to miss you not being there.

School has given me some wonderful opportunities and no matter how rubbish your day may be, there is always a child who says something bonkers mad and makes me laugh.  I will miss them all.

Talking of opportunities Tuesday last week saw me driving around the country lanes near school looking for Matt Baker and Maisie as the Children in Need Rickshaw Challenge went right past the school.  I found them and the support vehicles some in very challenging lanes near school, and then raced back to school via a shorter route so we could get all the children ready.  Matt and Maisie looked exhausted so I told the children that they needed a lot of encouragement. 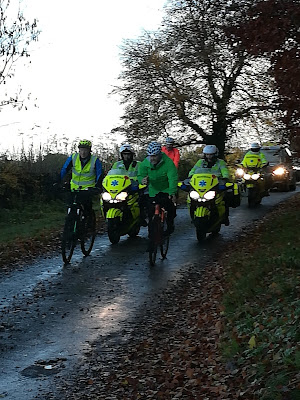 We lined the village and made a huge amount of noise as they came round the corner and we were rewarded with wide smiles.  Over £50 million has been raised this year.  Wow. 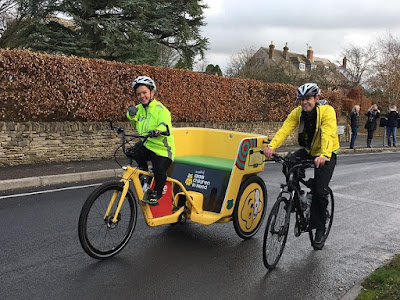 When I woke up this morning it seemed a bit naughty not going to school in term time and I contemplated my day.  I didn't imagine that I would receive a text from Master Clicky asking me to retrieve a part of his bike.  He had fallen off (yes, again) with no injury but realised that the cover for his battery (electric bike) must be on his route.  It was down here, a hill called Blackness.  This is actually tarmac, not that you would know as it's covered in leaves.  These are what caused Master Clicky to come off. 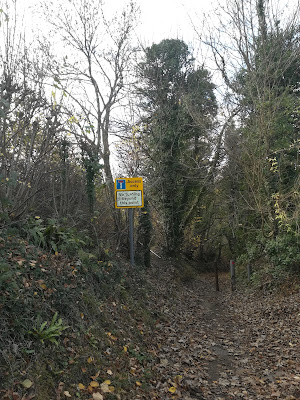 I put my walking boots on and me and the dog set of to find the cover.  It is incredibly steep and not used that much. 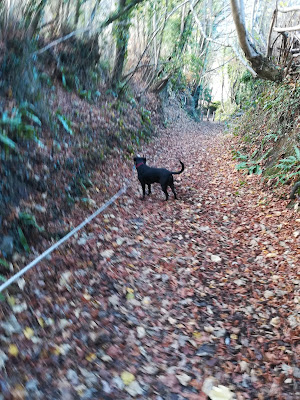 There are some bollards about half way down, presumably to stop you if your legs are going too fast for the rest of you, and we found the cover by a tree. 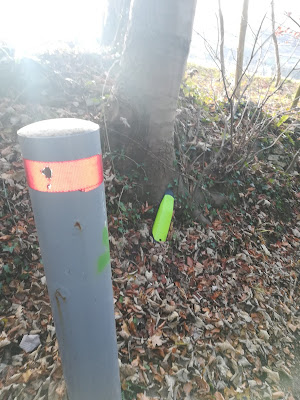 We stopped and looked over to the hill on the other side and then walked back up. 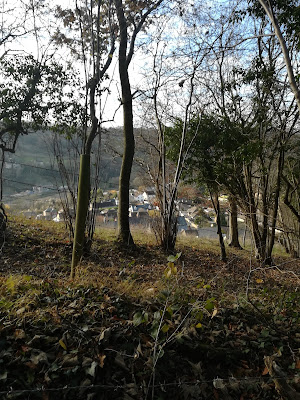 My hamstrings had a jolly good stretch and we stopped for a rest on the bench at the top and looked over to Minchinhampton Common. 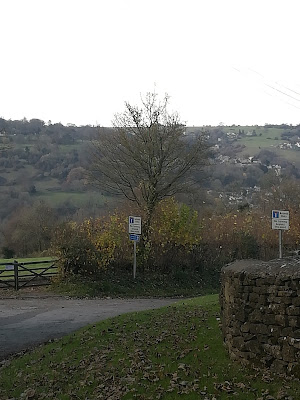 So that's me for today, on my second day of 'retirement' tomorrow, I've been persuaded to go on a school trip so not quite finished yet!

A colleague of mine has been hassling me for quite some time to make him a hat.  His son has started playing rugby at the same club Master Clicky went to, and I know from bitter experience how cold it can be there, so I relented.

It is a 4x4 rib in Drops Nepal that I had left over from my Afmaeli jumper.  It had to be stripy because I was using up lots of small bits. 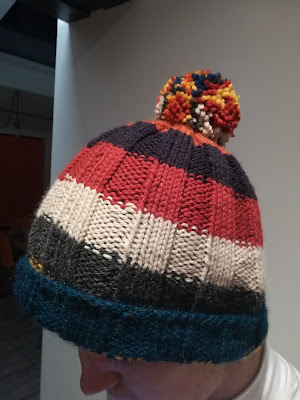 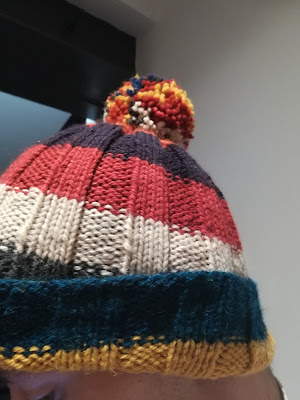 Master Clicky is still cycling to work and as it has started to get frosty of late he is finding that his head and neck are getting cold under his cycle helmet, which of course, has lots of holes in it. 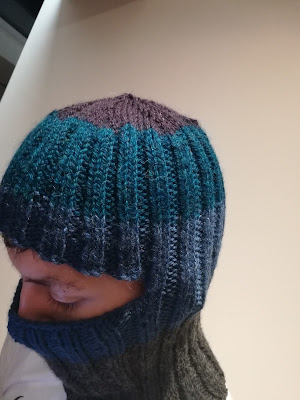 He requested a balaclava, so I found a free pattern on Ravelry.   I also made it from the left-over Drops Nepal.  I made it on the proviso that he doesn't go around scaring anybody or robbing banks.   It has been worn and he is liking it very much, although he did have to stop to take it off the other afternoon because it was too warm!  I'll take that as a success. 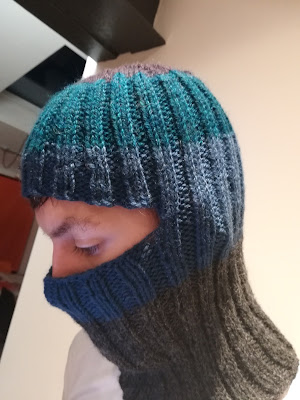 Incidentally, Master Clicky was looking down in these photos, not because he wanted to remain anonymous, but because he was watching something on his phone!

So after those two quick projects I'm back to my Dark Pearl Cardigan, going from Aran weight to 4ply and little needles that take forever.

I managed to get some digging in the garden done on Saturday but the weather has been damp and miserable today, so I've put some summer clothes away and got out the winter ones.  I love summer, but I also like a good jumper, a fire and a winter quilt to snuggle under as well.

That's me for now, as always, have a great week.