When you have a large crochet blanket on the go it is all consuming.  I got a huge urge last evening to KNIT something, anything.  I decided to pull out my stripy cardigan, a few hours of mindless stocking stitch being just what I needed.  Unfortunately as I had shoved  tidied it away in October I must have snapped the needle.  No knitting of this then. 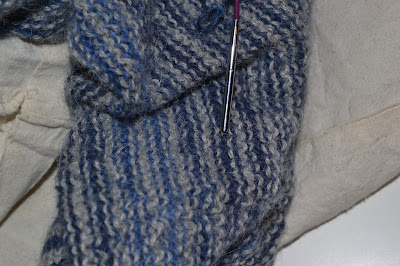 Still desperate to knit I found a sock.  These were the stranded ones I was doing when we went to Chicago in July.  I wanted to master continental knitting, and, sat by myself in a hotel room while Mr Clicky was at work, I did!  I'm just progressing through the heel.  My restlessness was quelled. 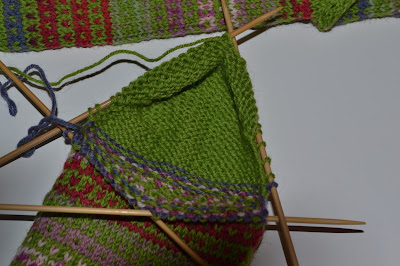 Now, I am, probably like most crafters, unable to sit and not do anything with my hands.  I took the crochet squares of the temperature blanket to school to sew in the ends in during my lunch hour.  Now that they are all done my colleagues said they were "a bit worried you're not doing anything."  As the wedding blanket is for one of said colleagues and a surprise I can't take that in to work on so I decided to carry on making the pom-poms the ends are making.  How to transport a load of short bits of yarn, without ending up in mess?  Put them in little pots.  I had a happy ~ I know, sad ~ half hour separating all of those little bits. 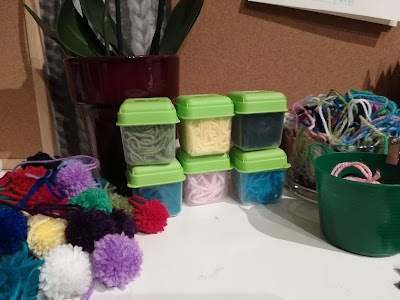 I can make two or three pom-poms whilst eating lunch.  The bag gets fuller. 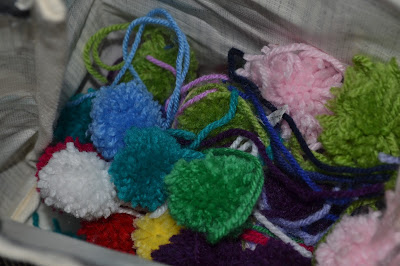 Lastly, I need to ask some advice.  I currently blog using our family Mac but I would really like to use my iPad as well.  I wonder if anyone could offer some help about which app to use.  The blogger app is no longer supported and I didn't really get on with that anyway.  If you blog from your iPad how do you do it?  I'm really interested to know.  I don't mind spending money on an app if it will work.  Thanks in advance!

I've been sorting today.  When our new kitchen extension was finished back in October I didn't have the energy or inclination to properly sort out the kitchen drawers.  I just chucked ~ quite literally ~ all the contents of the old drawers in and shut them.  Now I'm not talking about the cutlery and utensils that was sorted at the time, but more the pens and things that you accumulate.  A lot of the things have gone in the bin; I found 5 keys to tighten up rugby studs, spare studs, two packets of 50 balloons ~ 100 balloons what was I thinking?, 3 pairs of 3d glasses from the cinema ~ I hate 3d cinema gives me a headache, 5 lanyards, a paint colour chart, thousands of elastic bands, more pens than I know what to do with, 10 Ikea pencils, loads of Ikea Allen Keys, rawl plugs, screws............I could go on.  Anyhoo the drawers are now a lot lighter and more streamlined. 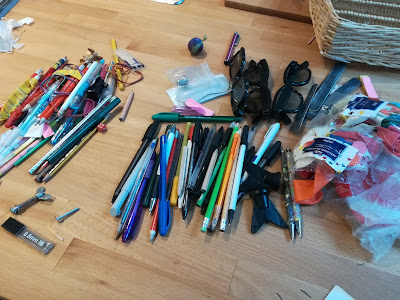 I've also had the laminator from school apart and removed a laminating pouch that got stuck. 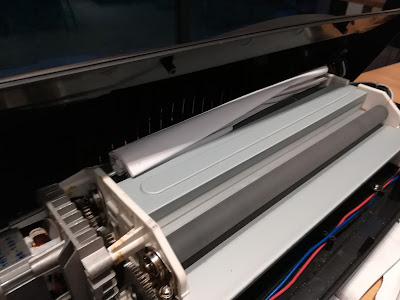 I've filled my car up with oil, done several loads of washing, donated some items on my local Freecycle, walked the dog and fed the wild birds.

Do you remember Miss Clicky's boyfriend was in Shetland and I said he wasn't allowed to by any wool for me?  Turns out he did.  One of my Christmas
Presents was a Jamieson's bag and a ball of yarn. 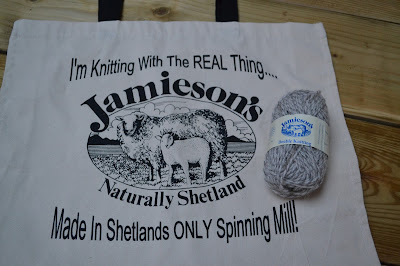 On the reverse is a key to wooly dialect, makkin apparently, is knitting.  I was very touched. 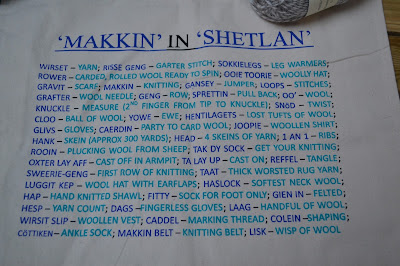 My temperature blanket is nearly ready for the border, just have to sew in those ends.  I know some people hate this stage this stage but I quite enjoy it. So if you need me that's where you'll find me this evening, on the sofa sewing in ends. 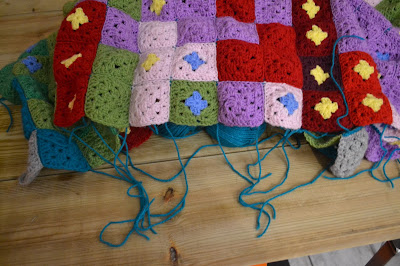 As always have a lovely week, and if you're in the U.K. make sure those hatches are battened down, there's some weather on the way.

I hope you all had a Wonderful Christmas and A Happy New Year.
Our plans for a family gathering of 12 were slightly scuppered by some more snow.  We ended up postponing until New Year's Day instead.  I needn't have hung my pom-poms on the tree in the front garden after all. 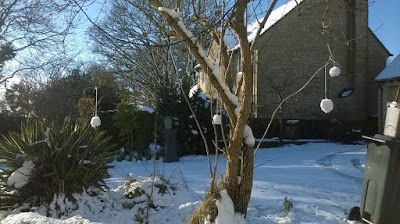 My 50th birthday sneaked up on me just before Christmas. I'm not sure how but there we go.  It was fairly quiet; I'm trying to get people at work to make allowances ~ not sitting on the floor etc. ~ 'because I'm over 50' but they're having none of it!

One of our lovely friends made me some massive crochet hooks from wooden dowling.  I've put a 4.5mm hook next to them for comparison.  I'm not sure if I'll use them or not but they are very tactile and a handcrafted present is always wonderful. 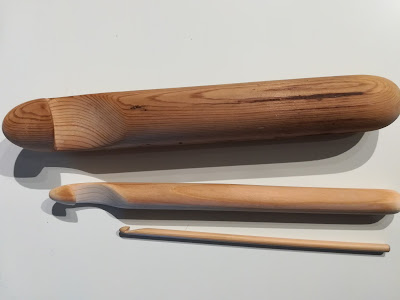 Mr Clicky undecorated the Christmas Tree when I was back at work ~ he sent me a text saying what a well co-ordinated tree it was!  I did ask him if he had noticed the tree at all through Christmas and he said yes, but he hadn't fully appreciated it.  MEN!!!! 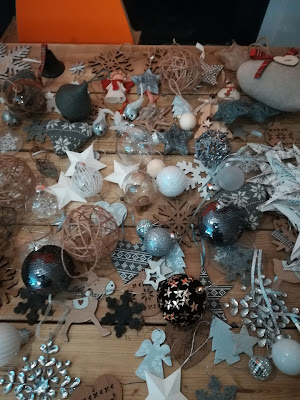 So my big news to tell you ~ apart from the birthday ~ is that Mr Clicky is currently working in Chicago.  He went in October, was back for two weeks over Christmas and I took him back to Heathrow this weekend, that was hard I can tell you.  I will see him again at Easter, his job will last for 3 years.  The plan is that I will join him when I can ~ at the moment Master Clicky is not yet driving so I have to take him to work in the morning ~ the other piece of news ~ Master Clicky has a job! He decided not to go back to college, has joined the world of work and at the age of 18 is earning more than me.

On a wooly note our Godson and his new wife are expecting a baby soon, and I was invited to the baby shower they had.  I made a Puerperium jumper, which I liked because the front opens completely.  This was finished at the 11th hour ~ if you look carefully there is one less stripe of blue on one of the sleeves (!) 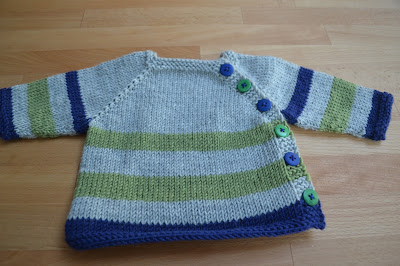 and also a pair of baby socks. 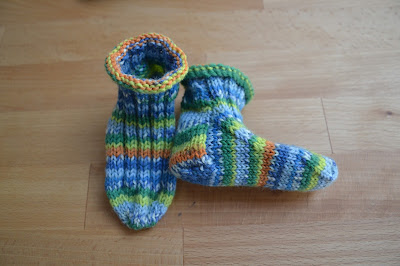 Good news! today is the last day of my Temperature Blanket so all that remains now is to crochet it together.  I shall be concentrating on this for the next few weeks.  I love the way it has come together and I can't wait to finish it. 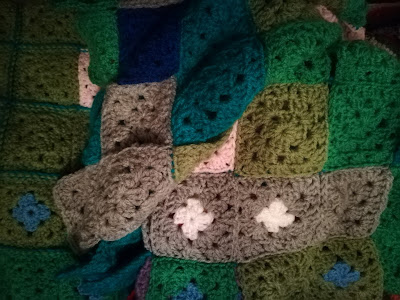