I am very excited to tell you that, at last, we have fibre broadband.  Now, I know there are many of you out there, that have fibre and you've been uploading and downloading with ease.  Not so in these parts.   BT decided that it was "not viable" for them to connect about 200 houses.  Some community minded individuals set up a group and lobbied BT.  They said "Oh alright then but you need to pay our profit."  This was roughly £25,000 so each household has paid what they were prepared to/what they could afford.  It's taken a while but we're now connected.  In fact that is one of the reason that my blogging has become sporadic of late, I get very cross with sitting and waiting to upload photos and Sunday evenings were impossible.

Today it has taken me a few minutes to upload the following pictures instead of half an hour ~ waaaayyyyyyyyy.

Something else that is super, whizzy, fast, my Afmaeli jumper. I've completed the body and I'm nearly to the top of the first sleeve.   That's the beauty of knitting in aran weight yarn! 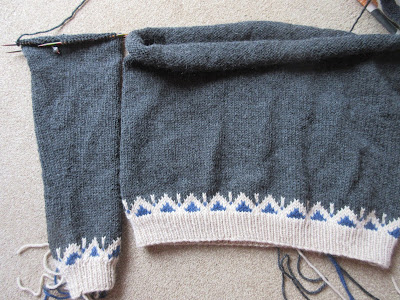 We had a go at putting up our new tent which will take us to our music festival next weekend.  This went up in our neighbour's front garden in a super, whizzy, fast 20 minutes. The dog approved, it has a sleeping pod and enough room to sit in as well.  I may be going to a festival but I'm not crawling in and out of a tiddly tent!  As you can see there was brilliant sunshine when we tried it.  Not so today, there is more rain.  I'm keeping everything crossed that it stops for next week. 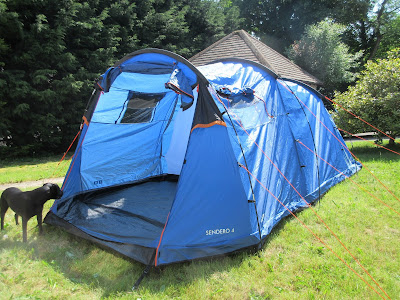 And the last super, whizzy, fast thing, Master Clicky when fielding in cricket.  He dives at the balls to stop them hitting the boundary rope and giving the opposition four runs, only trouble is, with all this rain, the ground is muddy.  Not sure these will ever be white again. 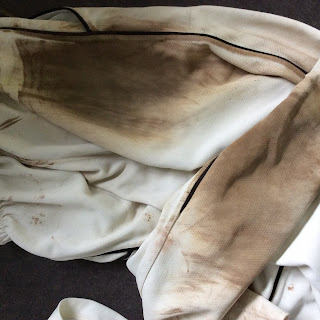 So that's me for now.  I'm off to do some ironing, yes you've guessed it, super, whizzy, fast and then I can get back to knitting.

It turns out that Mr Clicky isn't coming home until Monday.  He did tell me but I had forgotten.  Miss Clicky is camping in Cornwall and Master Clicky has been playing cricket all weekend so that leaves me and the dog.  It has been peaceful.

Me, Miss Clicky and her friend are going to Nibley Festival in a few weeks time.  I am equally excited and scared but it is a family festival so hopefully I can cope with it!  I've never been to a music festival before and we are going for 2 nights.  It is run by the little village it's in, the school PTA do the food and barbecues, the village shop have a sweetie stall, it's a local affair.  The headline act are Scouting for Girls ~ love them ~ and there are loads of local acts.

We've bought a new tent and I thought it needed some decorating so I got my sewing machine out and got stuck into some bunting. 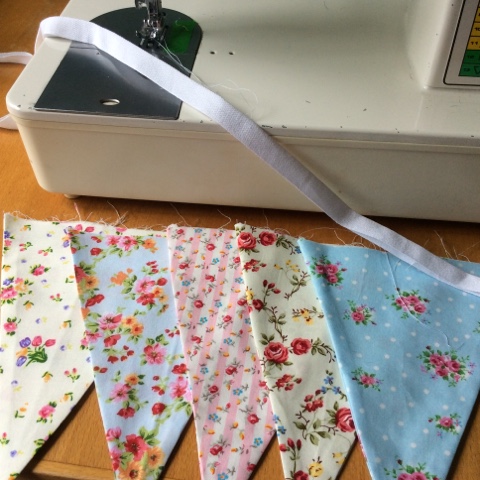 It is very girly but that was the fabric I had.  They are 30cm squares sold in a colour pack, so co-ordinate well. 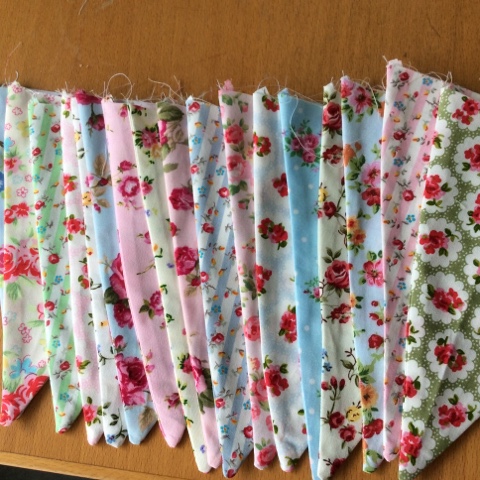 I used my sleeve ironing board which is brilliant for small projects.  I got from it from Amazon and for £6.60 you can't go wrong. 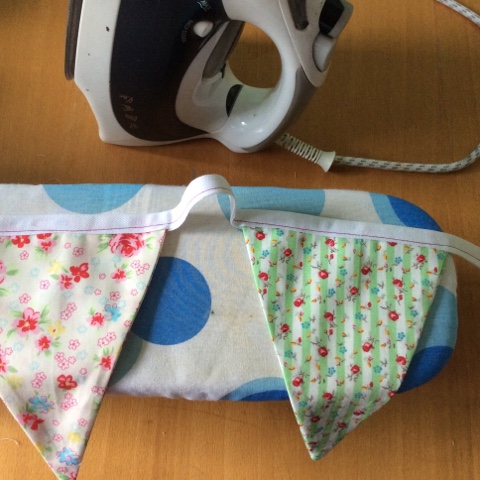 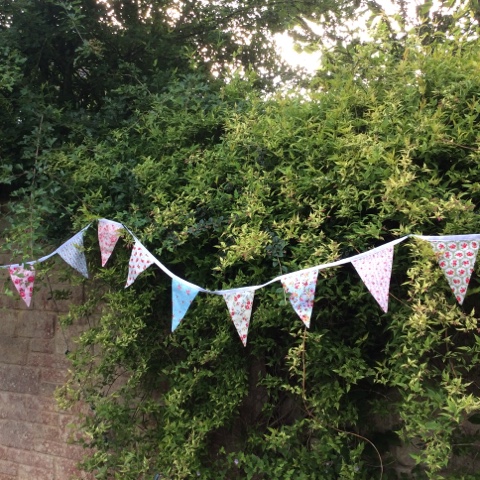 I really enjoyed making it.  I'm thinking we'll put it down the guy ropes of our tent and then we might not trip over them when we've been on the cider. 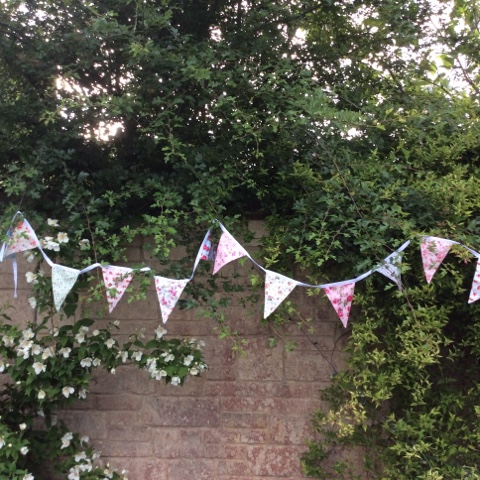 I still have a triangle left from each of the fabric squares, so I think I'll make more today with different fronts and backs. 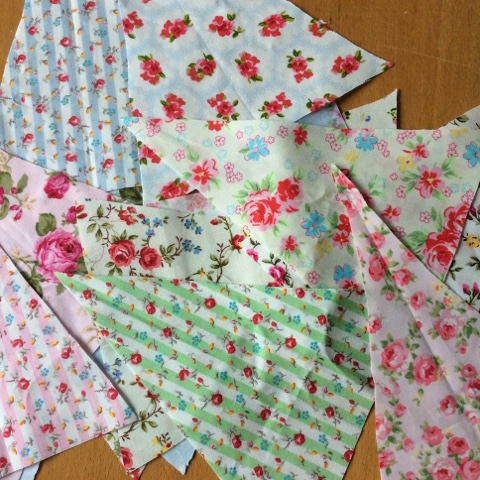 I'm pottering along much the same as usual.  We had some lovely sunshine last week but this week seems to given way to showers.  The Stinky Plant as it is known in these parts has flowered.  It's a Dragon Arum Lily, pollinated by flies.  It smells of rotting fish hence our family name of The Stinky Plant.  We've had it a good 10 years, the flowers seem to get bigger every year.  This year it had 3 flowers, each one about 50cm long.  It flowers for about 2 days and that's it for another year so as I write, it has gone again. 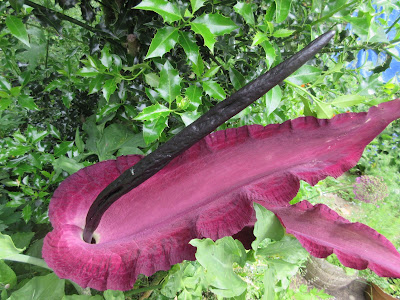 I finally gave in to that Drops Nepal yarn I showed you the other week.  I am making an Afmaeli jumper by Vedis Jonsdottir for Istex the manufacturers of Lopi yarn.  A free pattern which I fell in love with, and according to Ravelry, 1056 people thought so too.
I am making the version with the multi coloured flowers in the yoke. 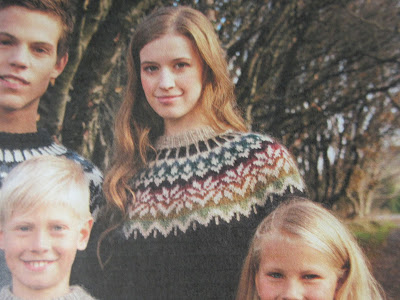 Drops Nepal is sheer pleasure to work with, soft and springy but dense and cosy all at the same time. 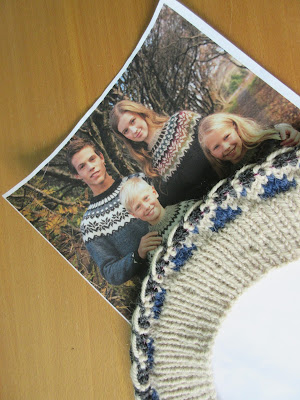 Of course it's all a bit boring at the moment, the excitement comes when you hit the yoke.  It's made in the round, bottom up, so I need to do the body and both the sleeves before that can happen though. 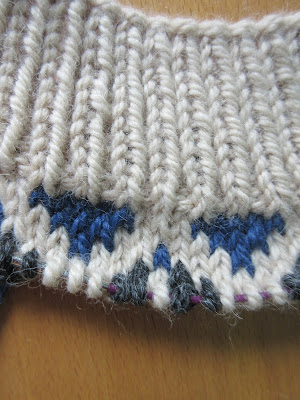 I'm looking forward to seeing Mr Clicky at the weekend, as he's been in Chicago again ~ the second time in three weeks.  I don't mind him being away so much but the jet lag can be a problem for him!