I haven't told you about The Bunnies.  Miss Clicky decided she wanted two rabbits.  "Ok," I said, "they live in the garage."  "Oh no,"  she said, "they're house rabbits."  This was new to me, I'd never heard of house rabbits before.  Now, if I'm honest I wasn't too happy about this (and I'm still not) but a week or so later, she picked them up, and they live in her bedroom.   They are Netherland Dwarf.  They grey one is called Blue and the brown one Thumper ~ yes, he really does thump the ground with his leg. 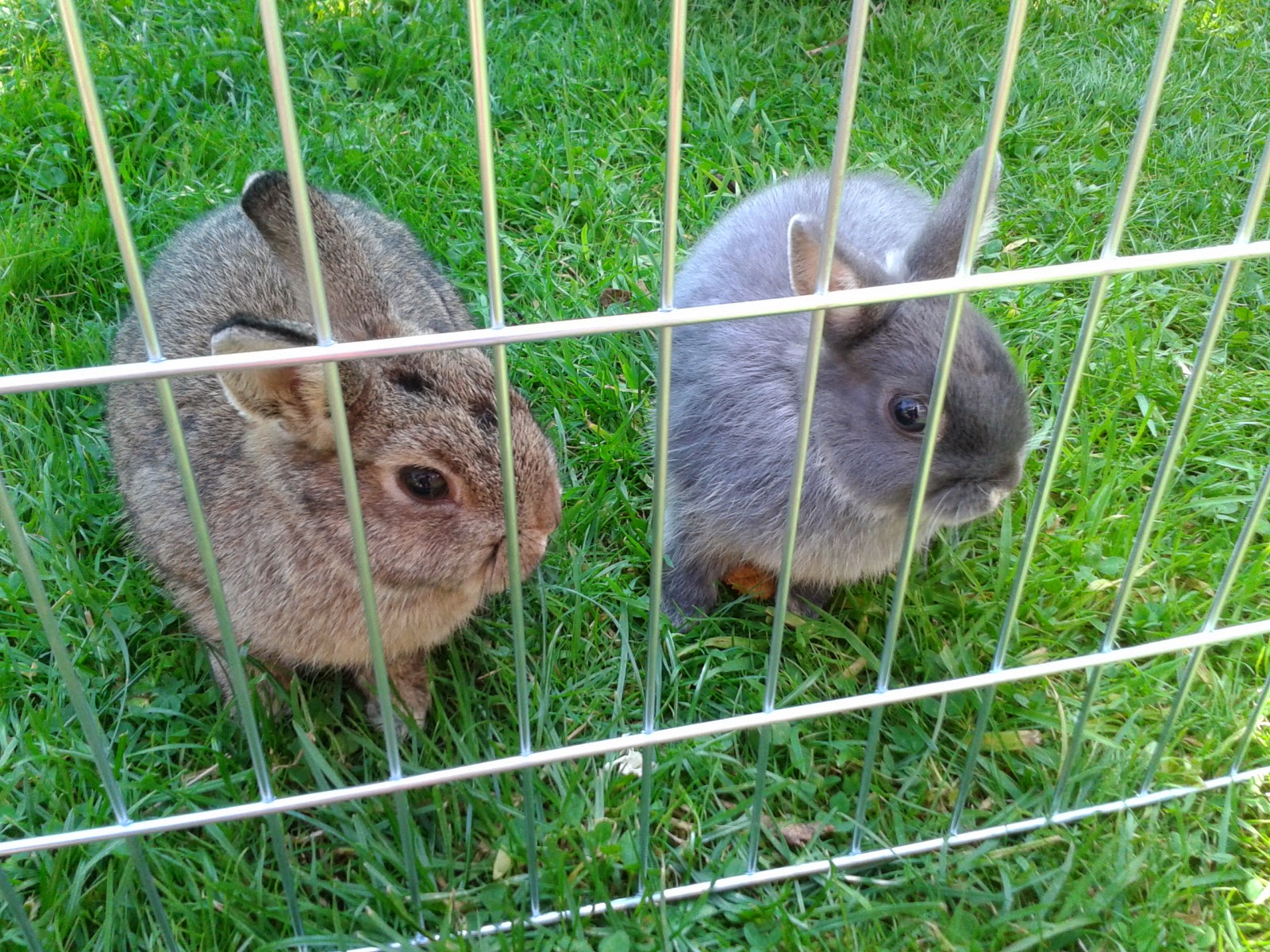 This Sunday Mr Clicky took Master C to rugby practice and the dog for a walk on The Common.    The dog is fascinated ~ and would probably like to get his paws on them, he stands quivering at the patio door when they are in their run in the garden ~ so it was a good time for them to go out without him around. 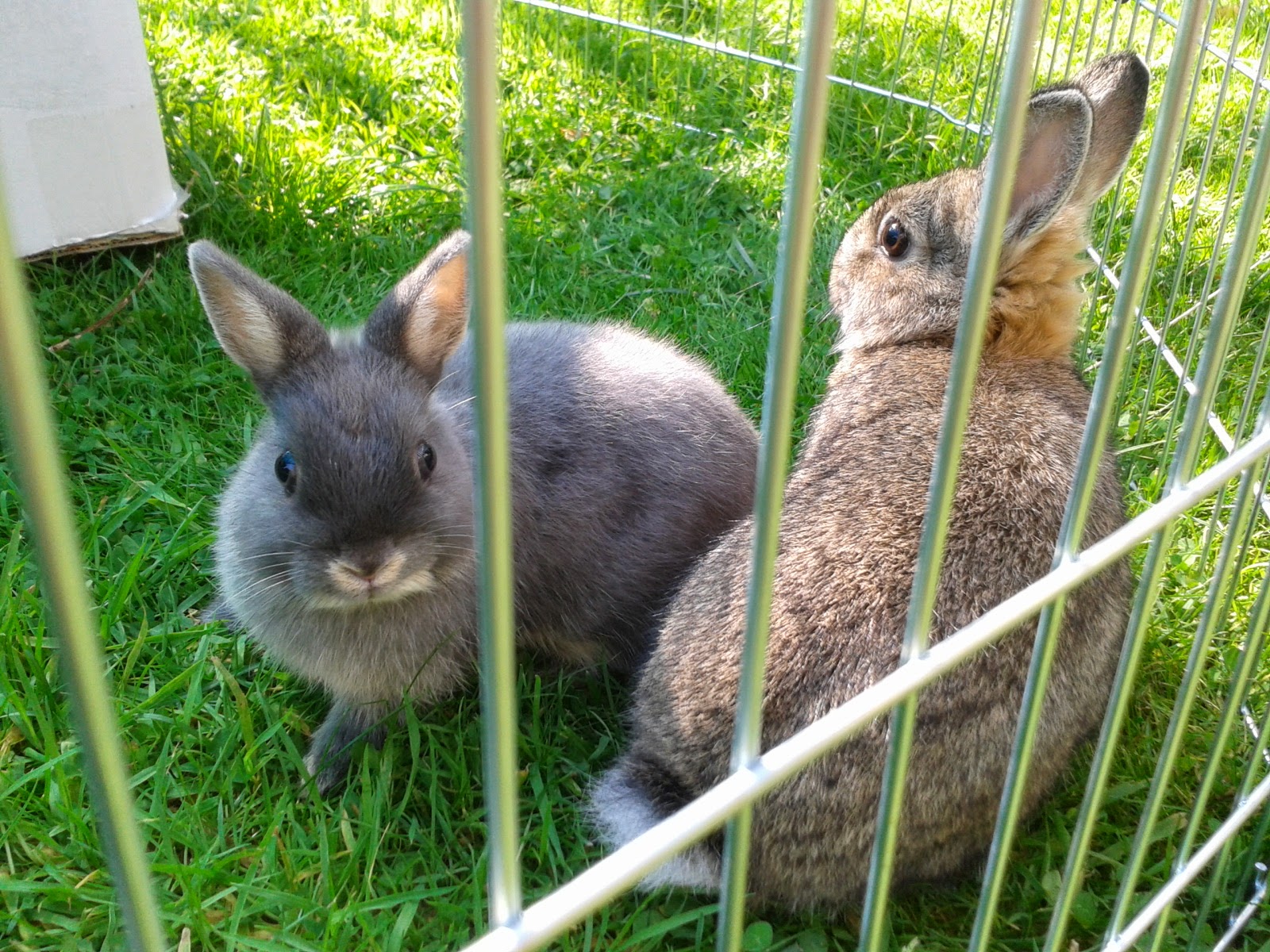 Despite the fact that they are from the same litter Thumper is a lot bigger than Blue.  They had a very happy few hours munching the grass in the autumn sunshine, the dog and Mr Clicky had a good walk on the common, Master Clicky got worn out from rugby training, and I pottered around at home.  Good Sunday.

I am still on my stripy cardi, but it is only 4 ply and I have 330ish stitches on my needles, so a row takes a long time, but I am nearly ready to split for the arms.

That's me for now.
Hope you have a good week with autumn sunshine...........Clicky Needles.

I was shopping in Stroud with Master Clicky on Saturday and this in a shop window stopped me in my tracks.  Wow! is the only was I can describe it.  A 'jumper' made of thistledown. 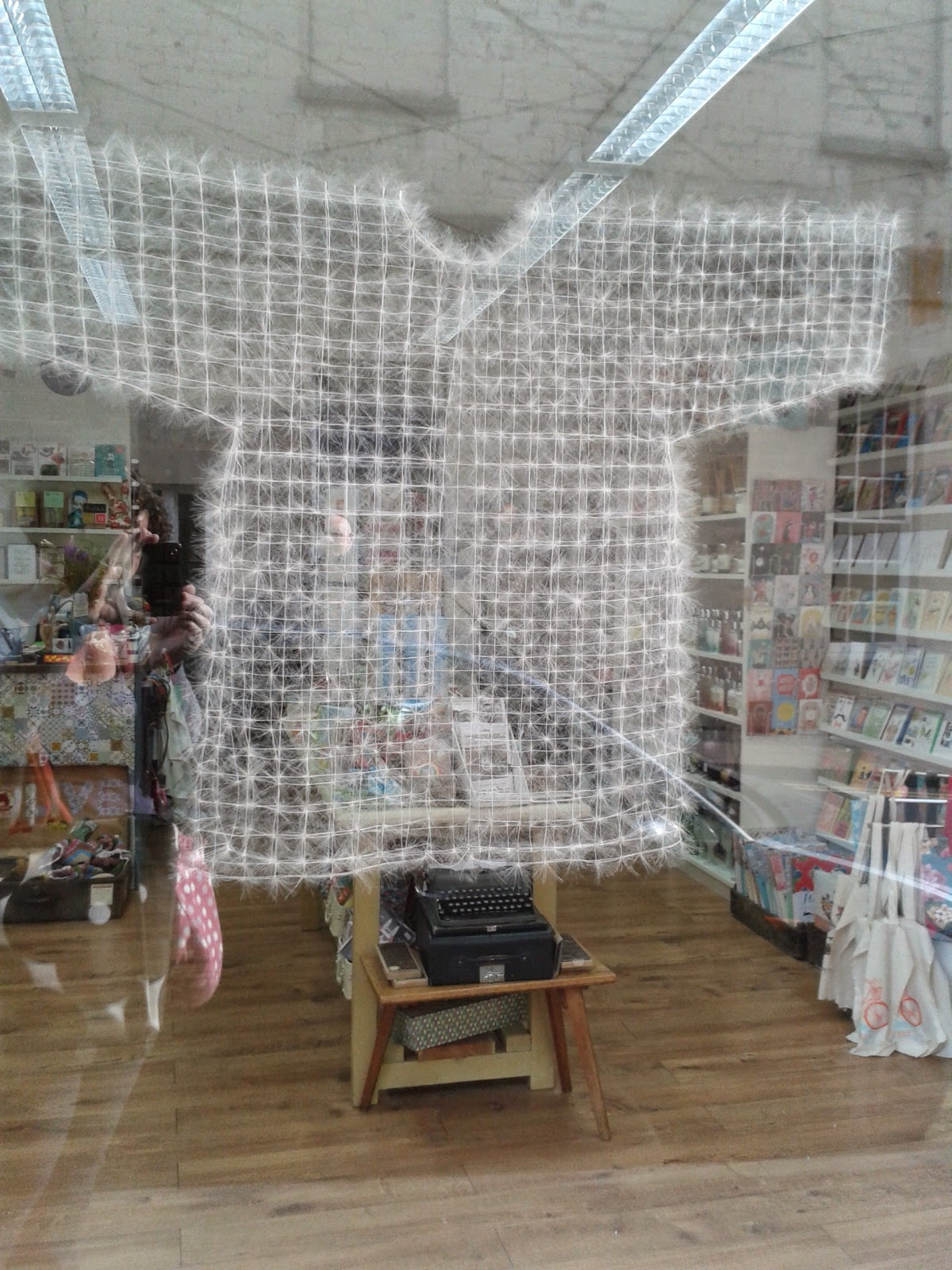 Each individual seed head has been pierced through by a needle and thread and then possibly woven,  I'm not quite sure, into square mesh.  I cannot imagine how difficult this must have been to make.   I had a chat to the shopkeeper ~ much to Master Clicky's disgust ~ he had been having kittens all day because children had been trying to touch it.
It was stunning.  If you're local, I urge you to have a look, it was just up from the Made in Stroud Shop. 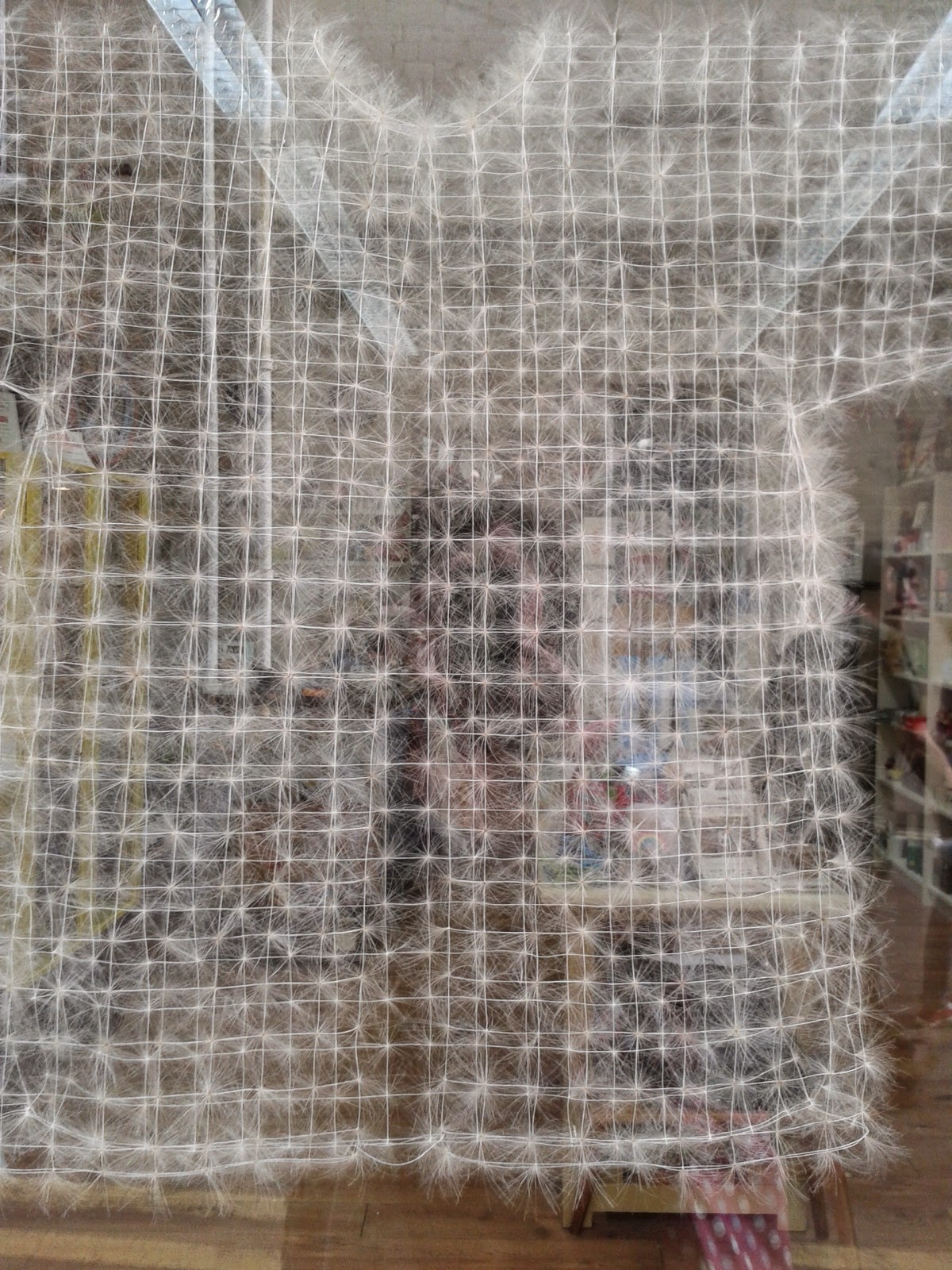 I was in Stroud with Master Clicky getting new rugby kit.  He has signed on for Minchinhampton Rugby this season and played his first game today.  He played for the first half for Minch and, because the other team were low on players, the second half for the opposition.  He has the white 'inside out" shirt on so as not to confuse anyone.   Minch won and the team played together well. 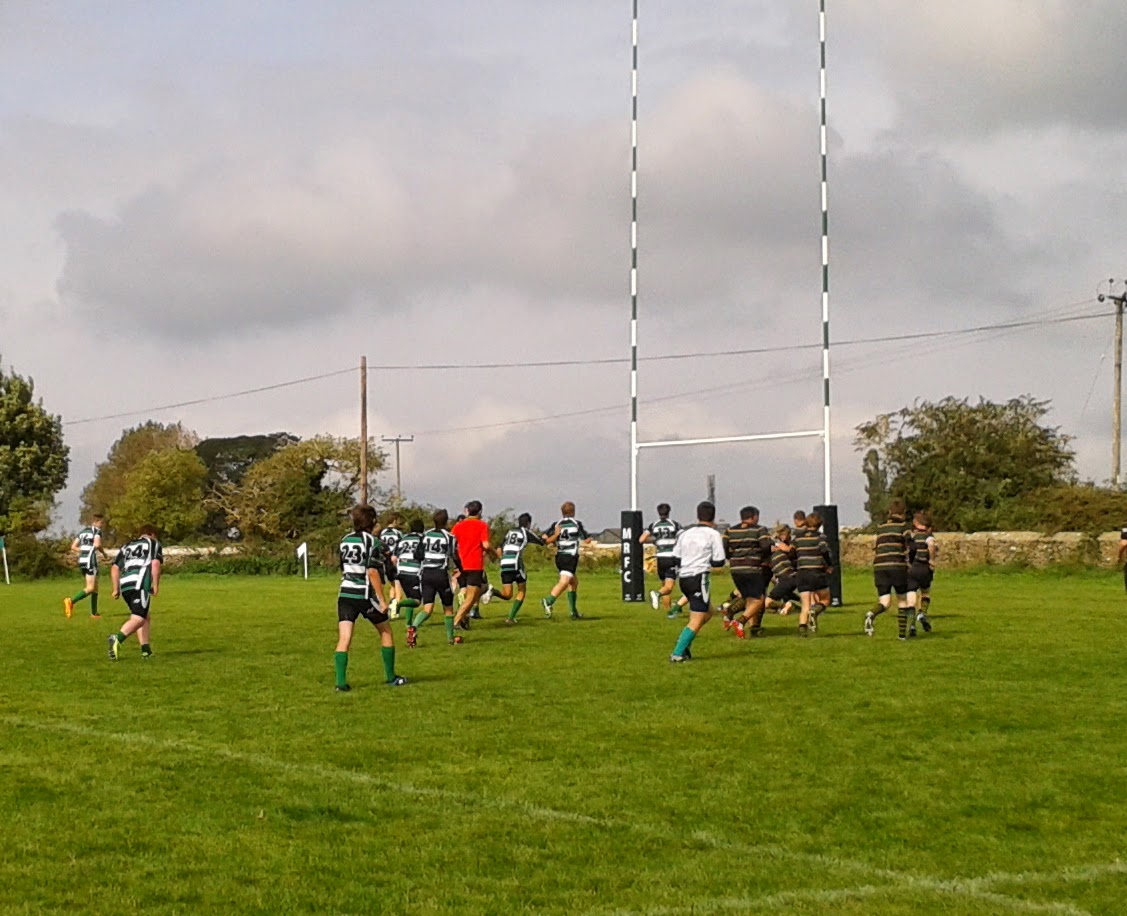 If you are local or know this area you will know that Minchinhampton can be very cold.  It is 700 feet above sea level and extremely exposed.  We have gone for walks on the common in the past and not got out of the car because the wind is so bitter.  I am not looking forward to colder days!   You can expect lots of complaining in the coming months about cold fingers and toes I'm sure!

We have been lucky this week to have the Tour Of Britain pass through the Cotswolds.  It went through the village where my school is, I was super excited.
Super, super, excited.
Then I realised I was on a Website course at the same time.
NOT HAPPY.
I left instructions with the teachers and children that went to watch to take photos.
The children had a fabulous time; they cheered everyone that came past, the car drivers before the road was closed, the police outriders who put their sirens on just for them and of course, the cyclists themselves. 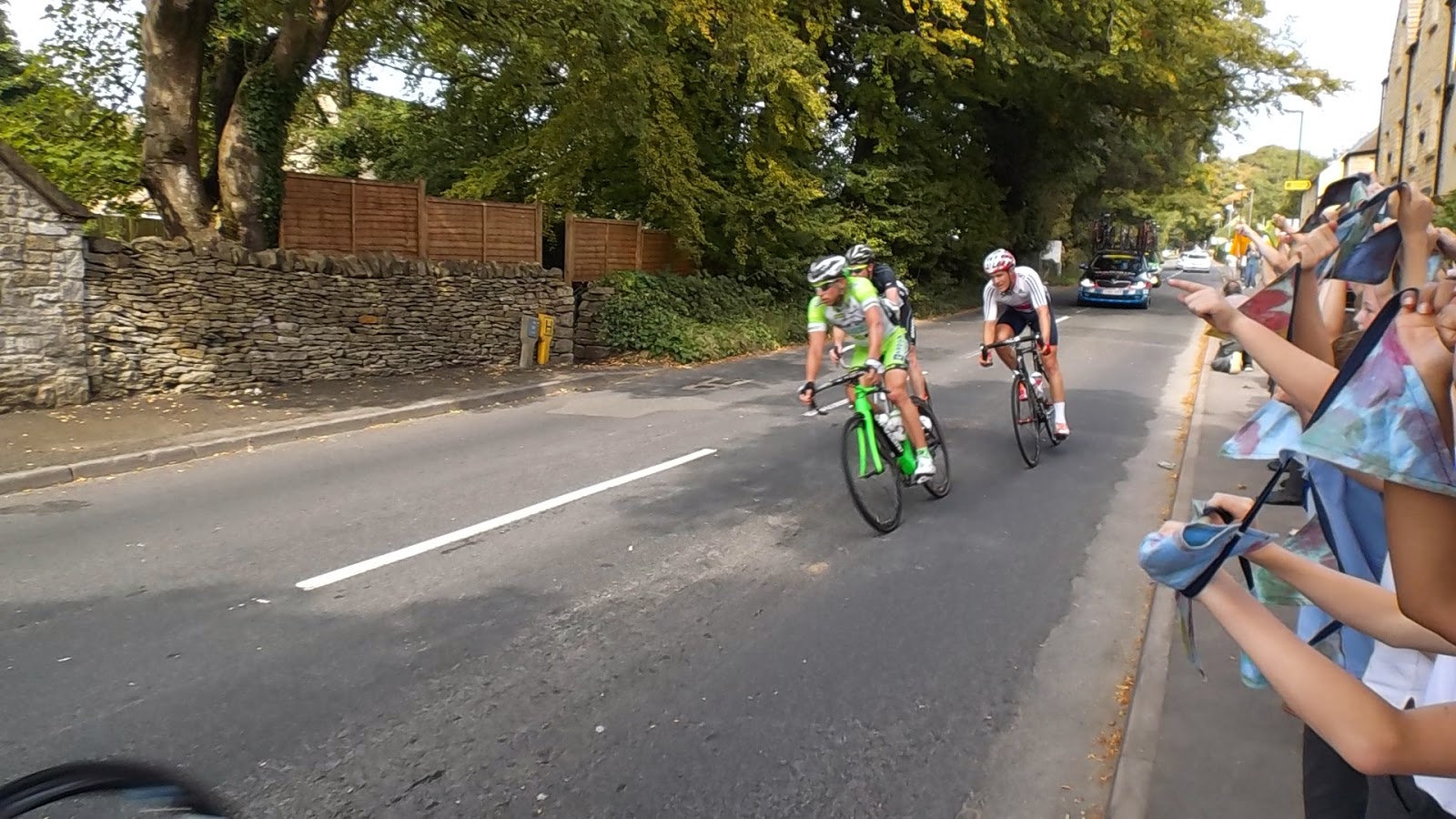 Apparently, they really wizzed by in a blur. 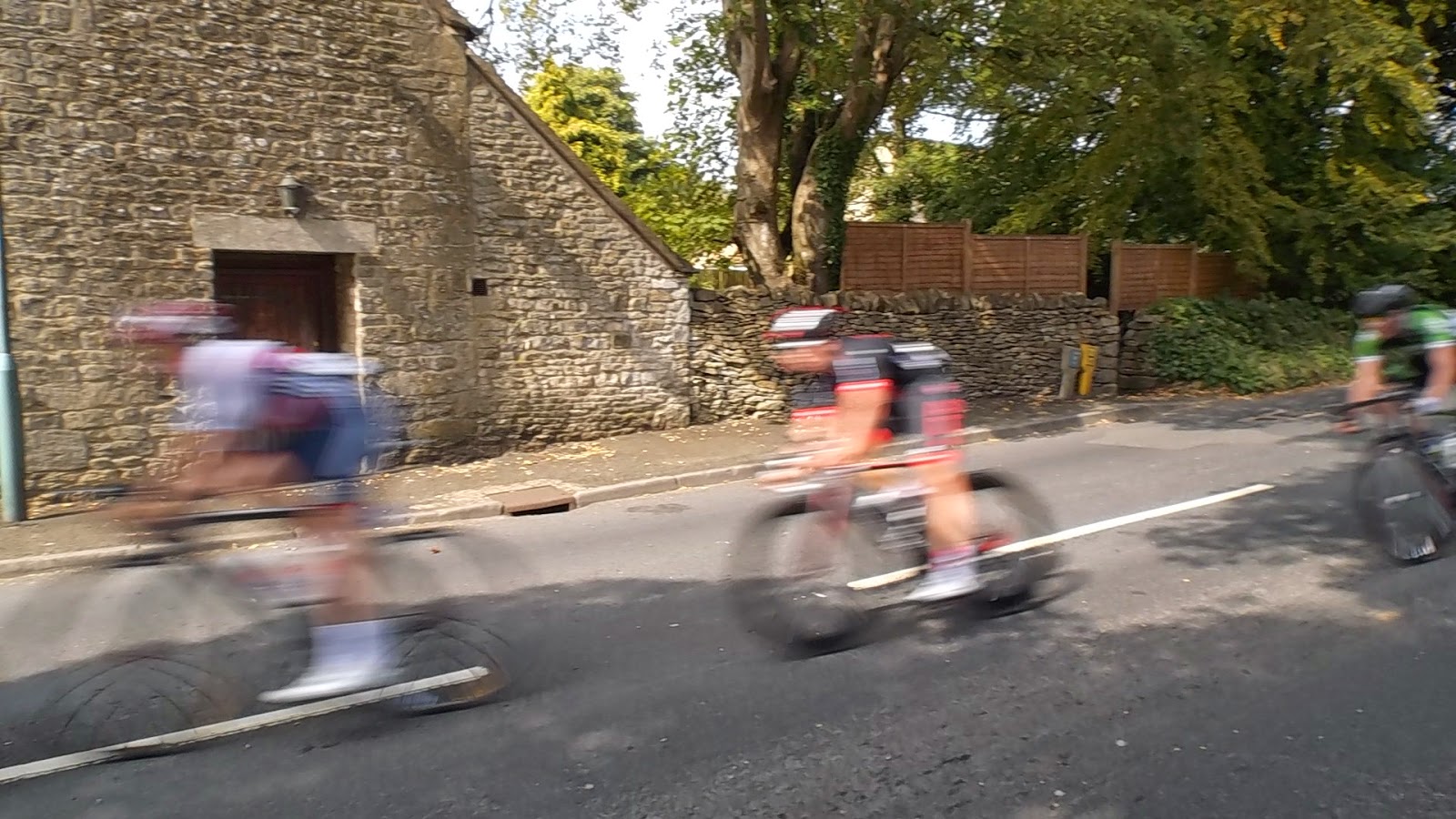 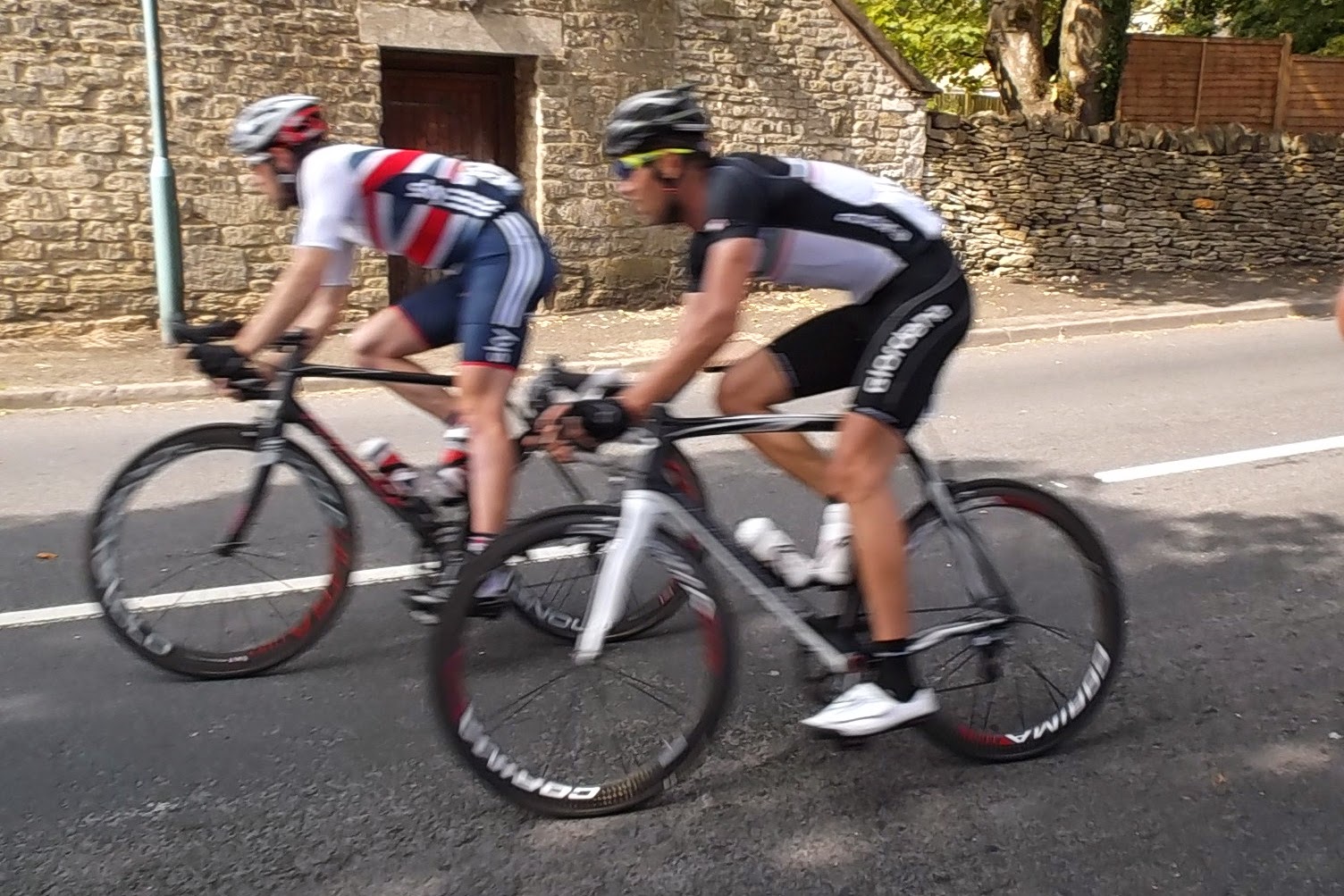 I think the Sky rider is Sir Bradley Wiggins, but I could be wrong.
I contented myself with recording the whole of the stage and watching it back through that evening.  I took some photos off the TV when it was paused, so this picture shows our children on the left, just before the cyclists take a 90 degree right hand bend, which I understand was very hairy to watch. 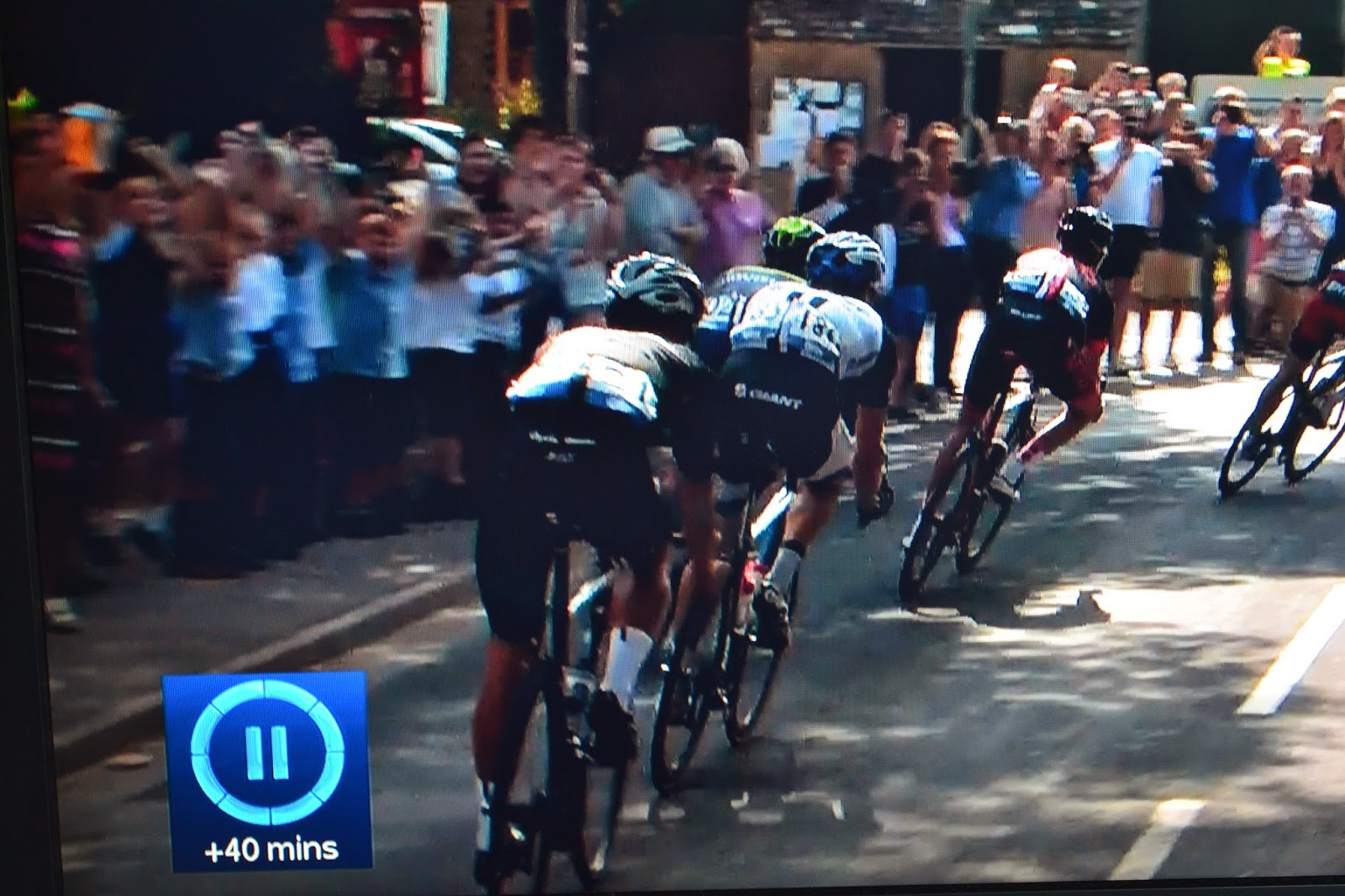 They carried on through the Cotswolds and past Mr Clicky's work, so he got to watch too. 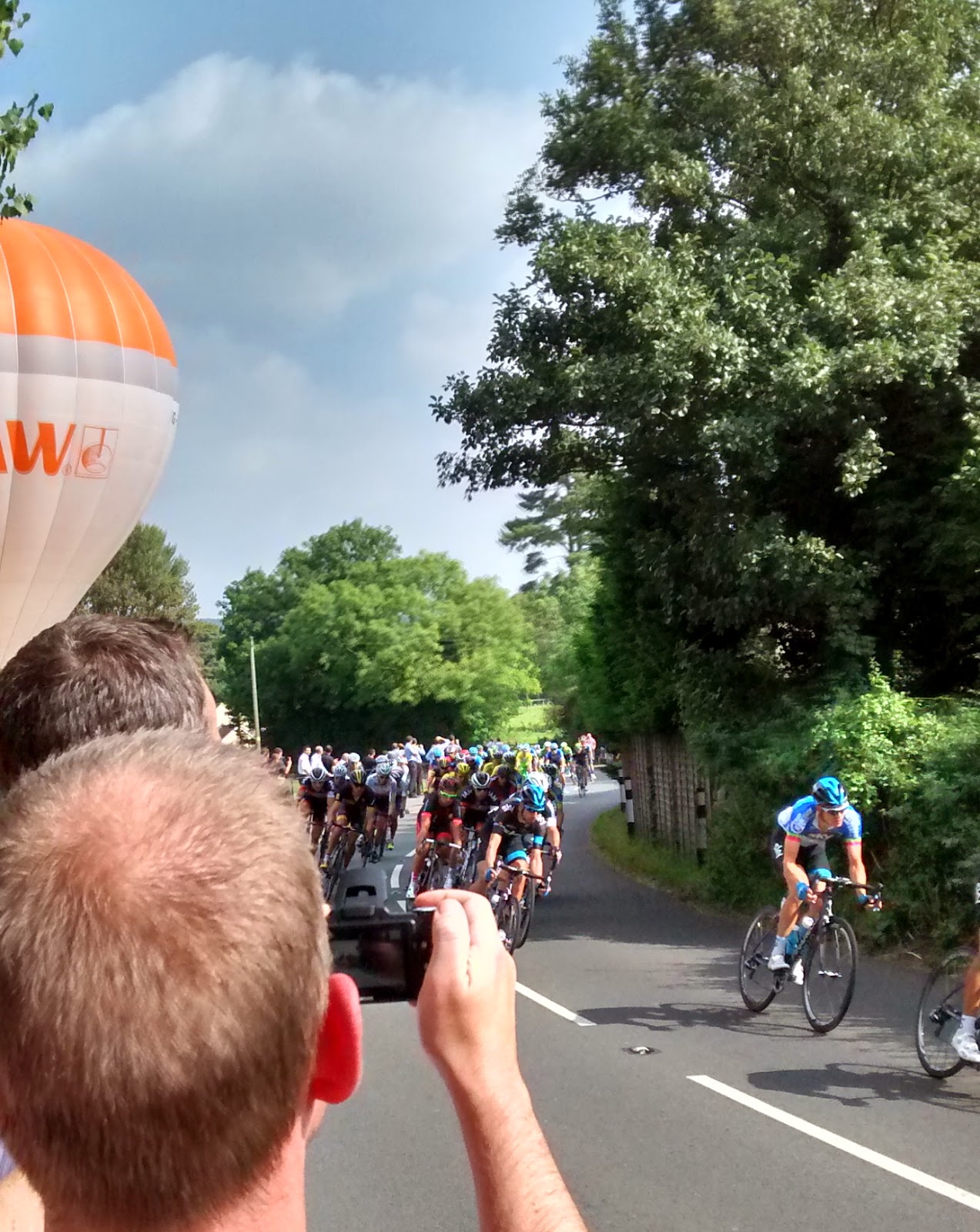 On the knitting front I bought some sock yarn from a Danish shop in Cheltenham called Tiger.  It's sort of Ikea-ish but only the size of a normal shop and has all sorts of bright bits and pieces that you didn't know you needed until you see them.  (have a look at their Website you'll see what I mean.)    As this yarn was £1.00 per ball and a lovely vibrant pink I bought 8 thinking I might make another cardigan like the green one I've just finished. 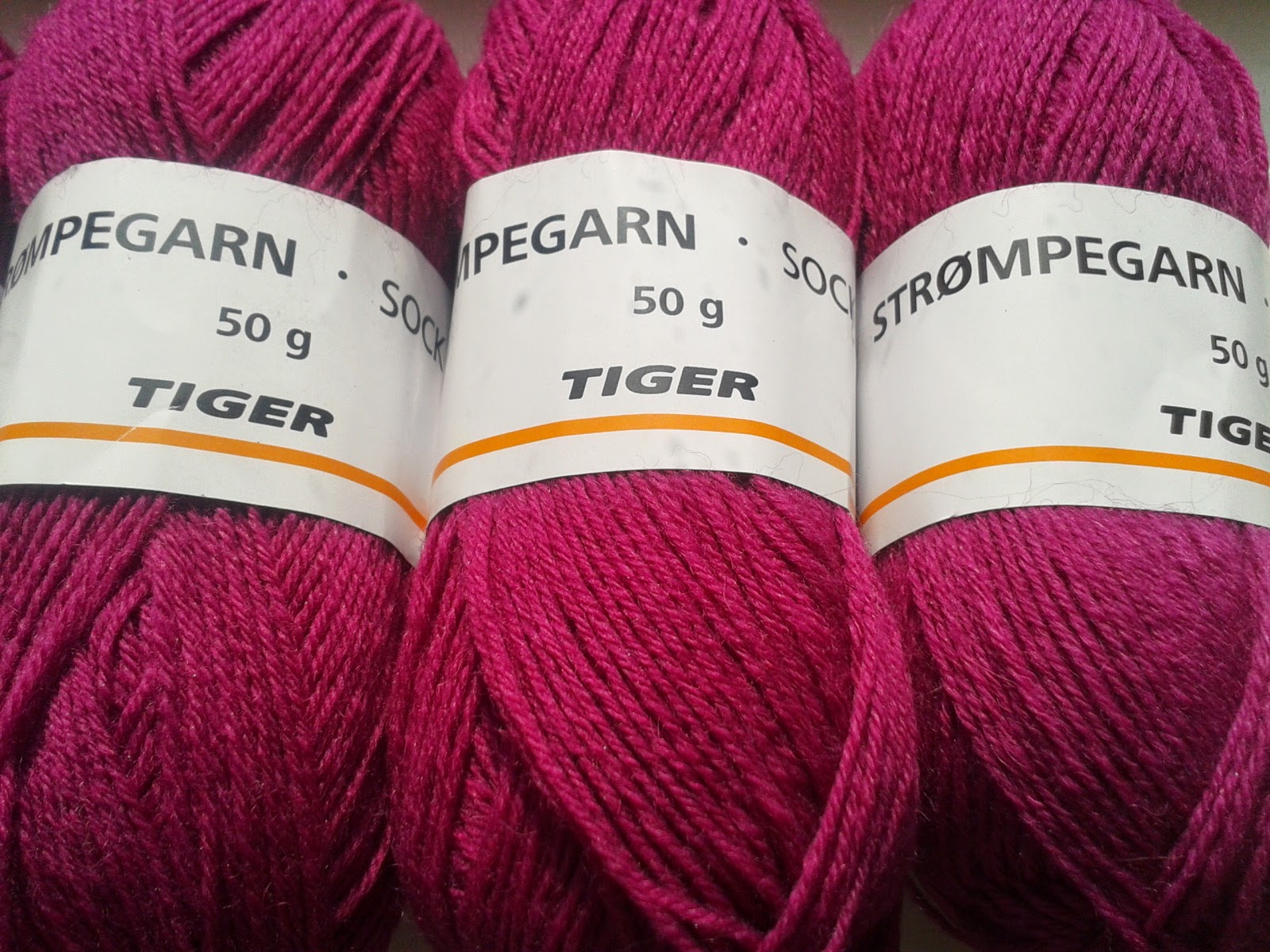 I also got 8 balls of the same colour pink but chunky weight yarn which was again, £1.00 per ball.
I'm not sure what to do with it yet! 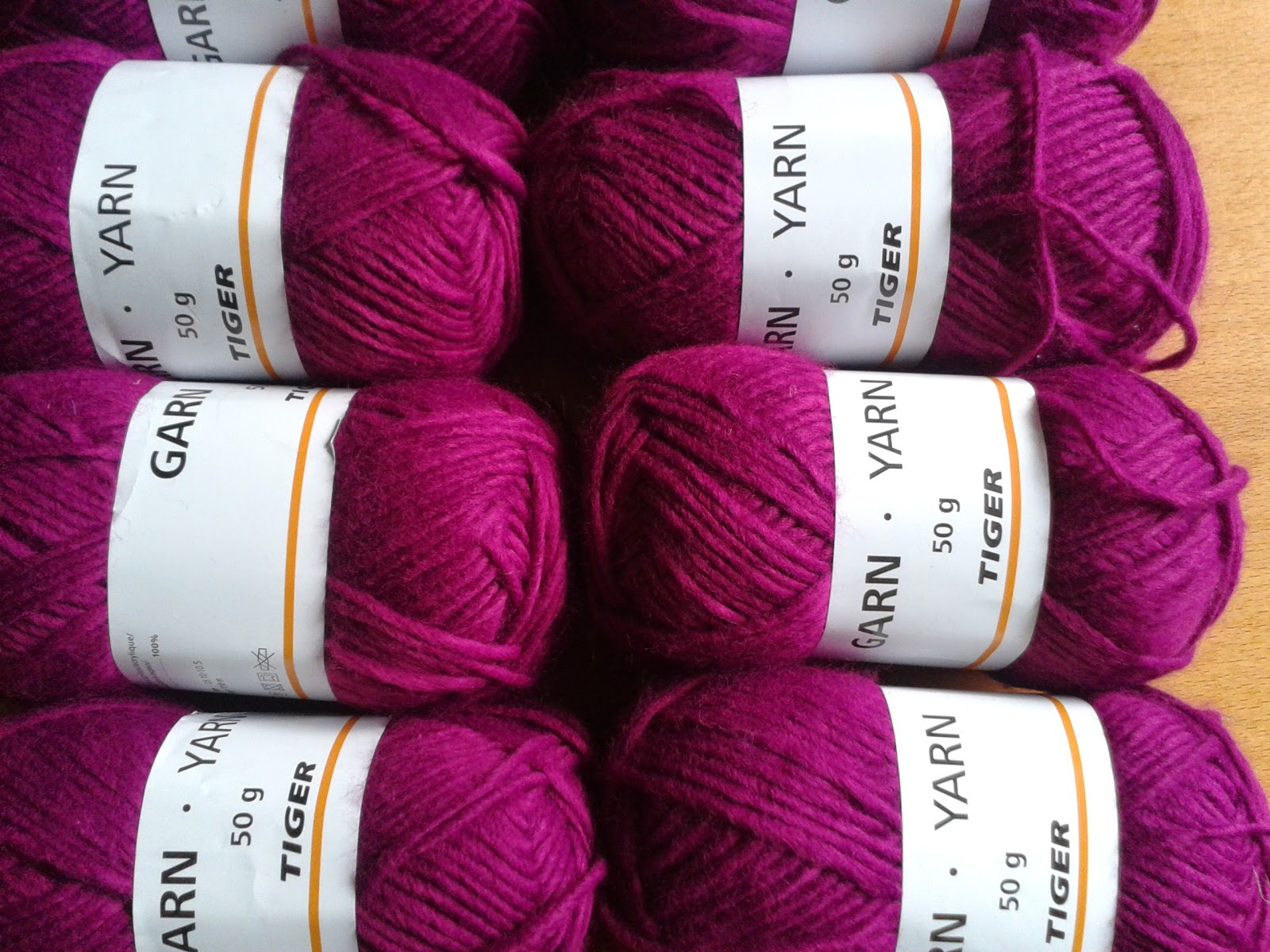 My Mum and Dad came for a takeaway yesterday and brought some dahlias from their garden. 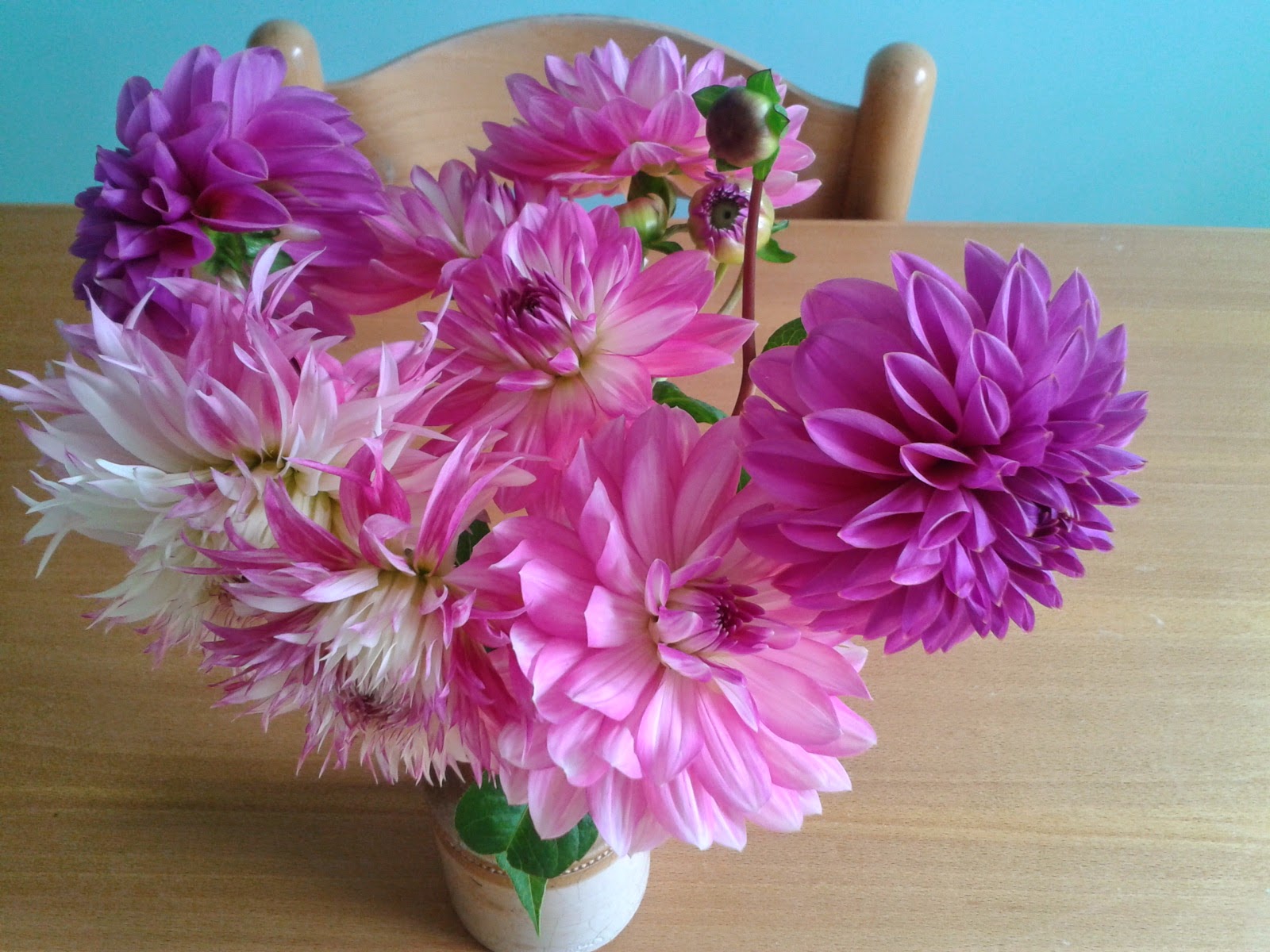 I had to split them into separate vases, as the colour clash was too much for me!  Thanks Mum and Dad! 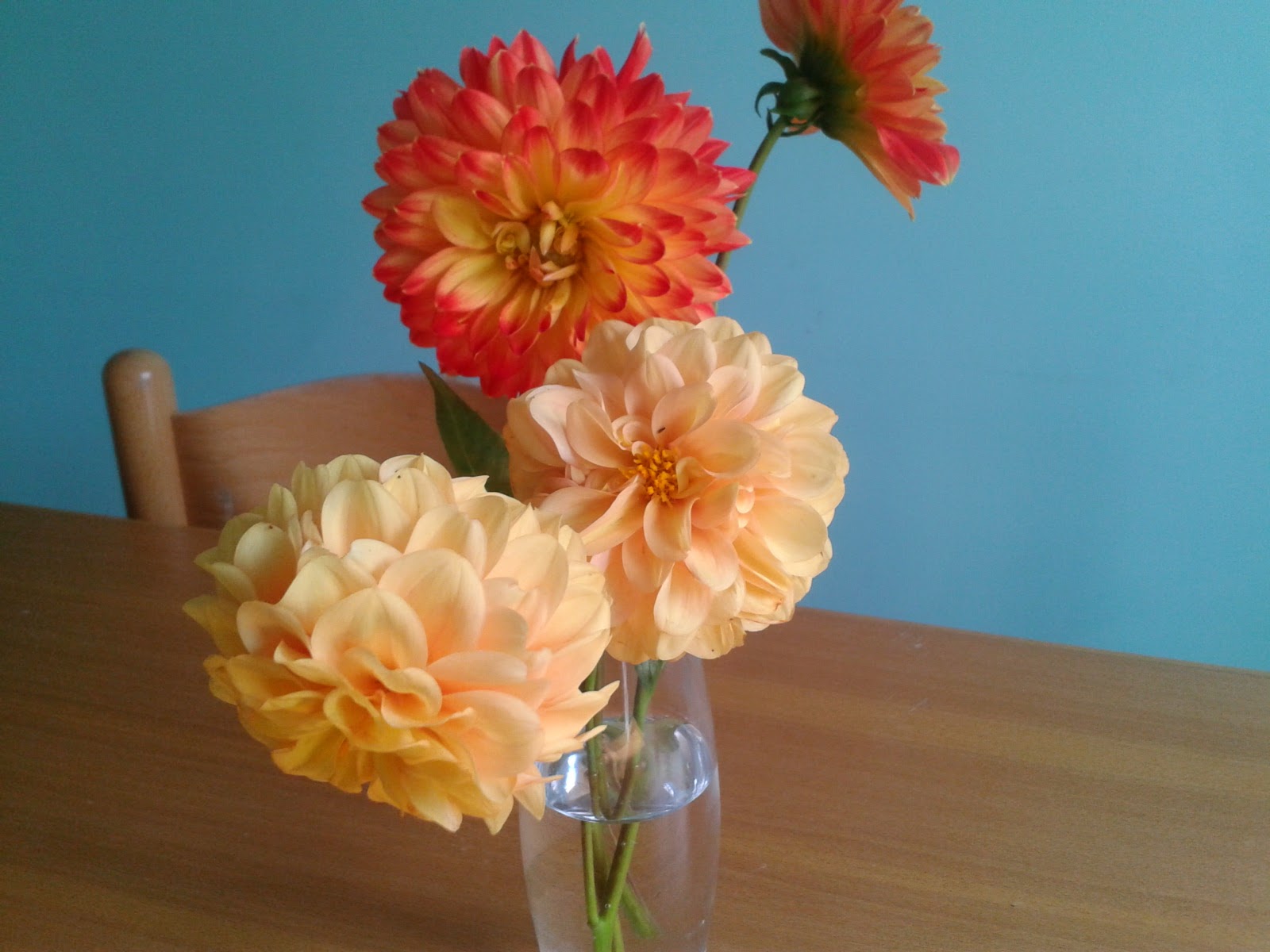 So that's me for now, the late summer sunshine is still with us, let's hope it keeps on going.

Email ThisBlogThis!Share to TwitterShare to FacebookShare to Pinterest
Labels: Tour of Britain

My Little Green Indifference is all complete.  This project was cast on in July (2012!!!)   The fronts were a doddle but the sleeves, well they didn't go so well,  they were far too baggy, so I frogged them back and then it ended up down the back of the sofa languishing in it's bag.  I dragged it back out in June ~ the year!   The pattern can be found here ~ it's a tie front shrug made from the top down.  Instead of making the ties I continued straight down to the bottom. 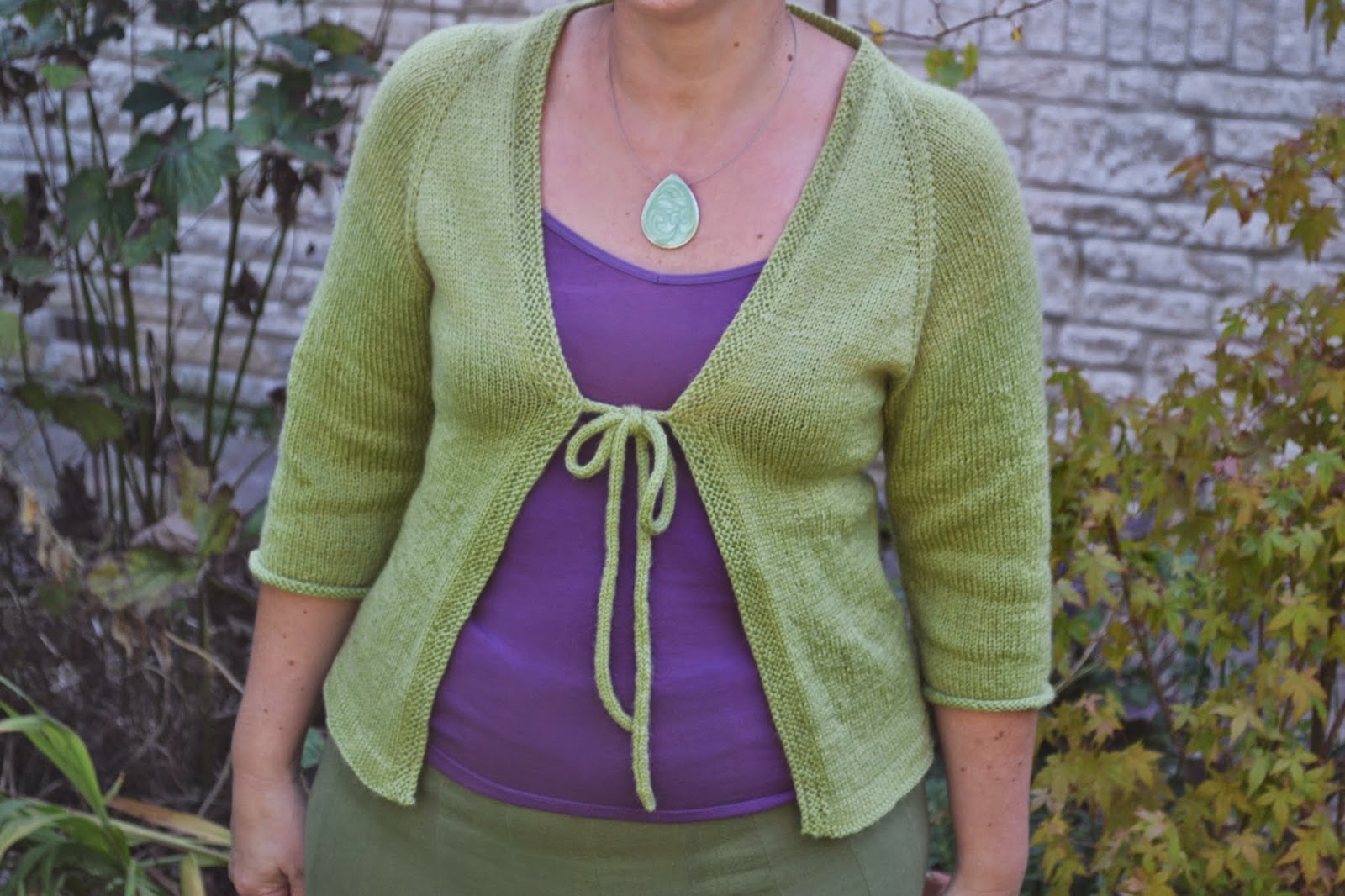 I made i-cord ties to tie under the bust.  I left the cuff edges to roll back and picked up 2 stitches for every 3 rows around the fronts knit 6 rows.  I'm pleased with the turned back hem and I love the colour of the yarn ~ 4 ply Stylecraft Life.   I think it will have lots of wear. 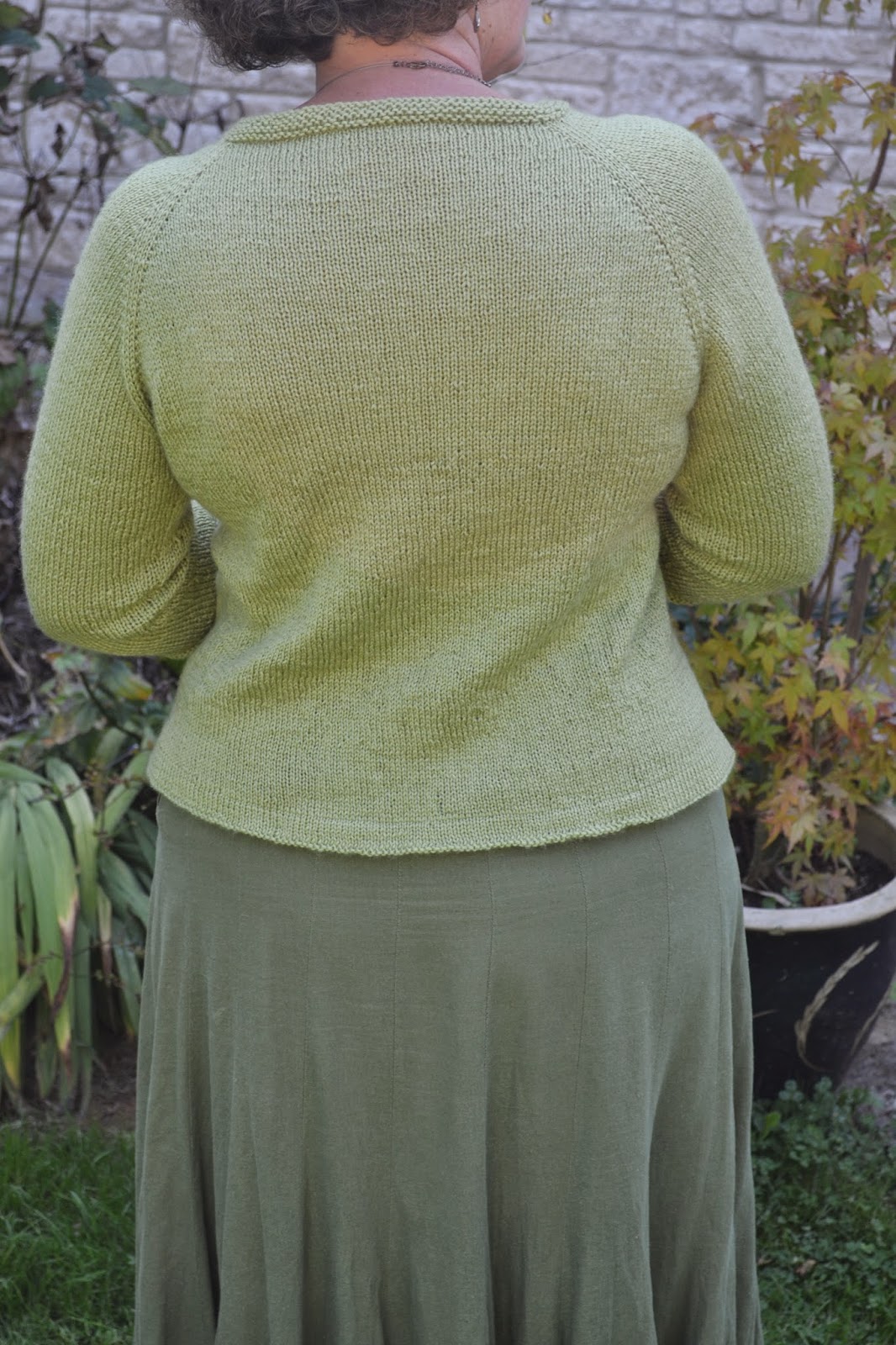 What a lovely few days we've had of September sunshine.   There hasn't been a cloud in the sky.  Mr Clicky and me could be laying a laminate floor in the bathroom, but we decided it was an outdoorsy sort of day instead. 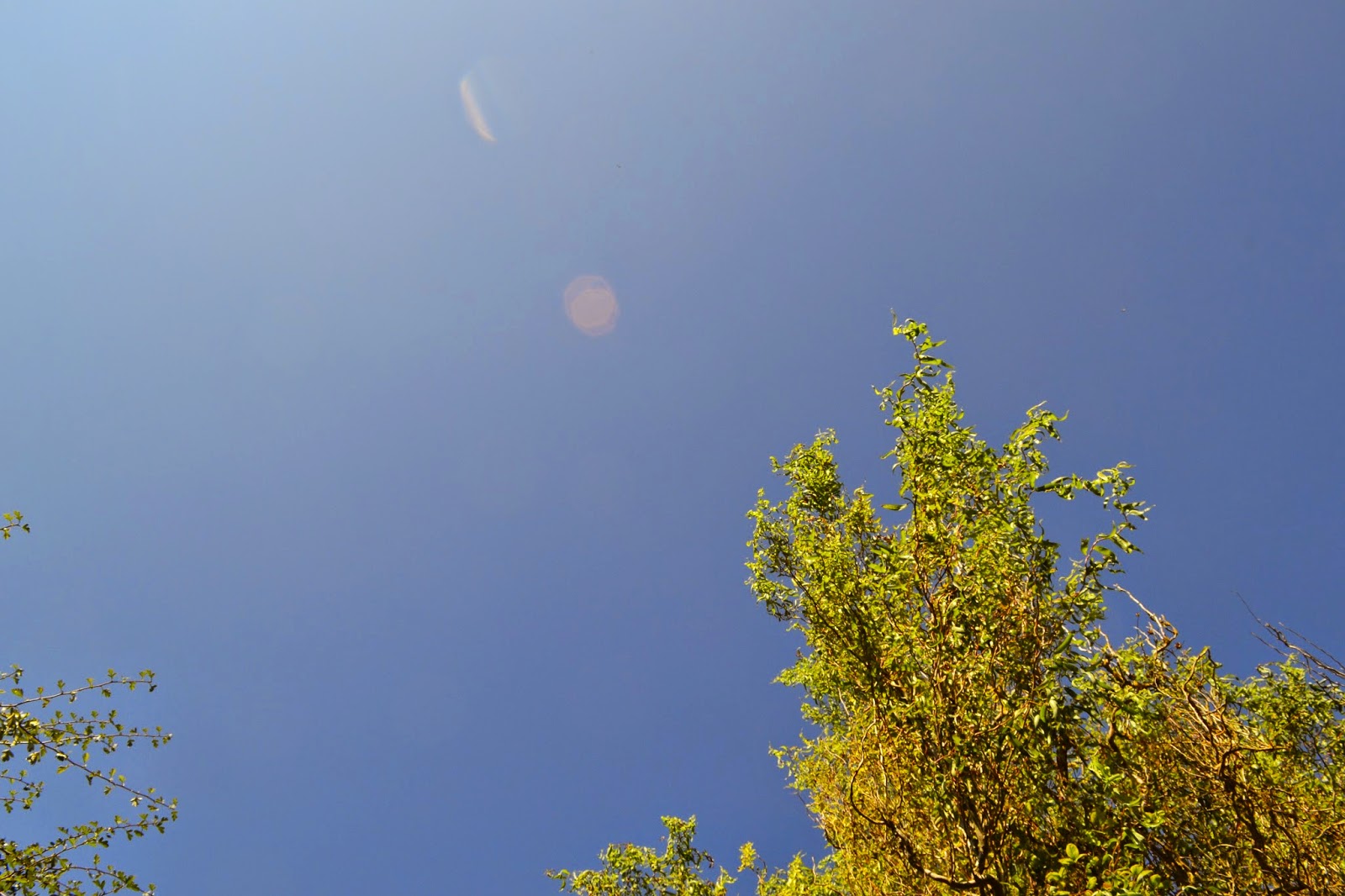 I sat in my favourite place in the garden and knitted.  I'm back on my frogged stripy cardigan and still loving the yarn ~ Drops Alpaca and the stripes in Drops Delight, good fun. 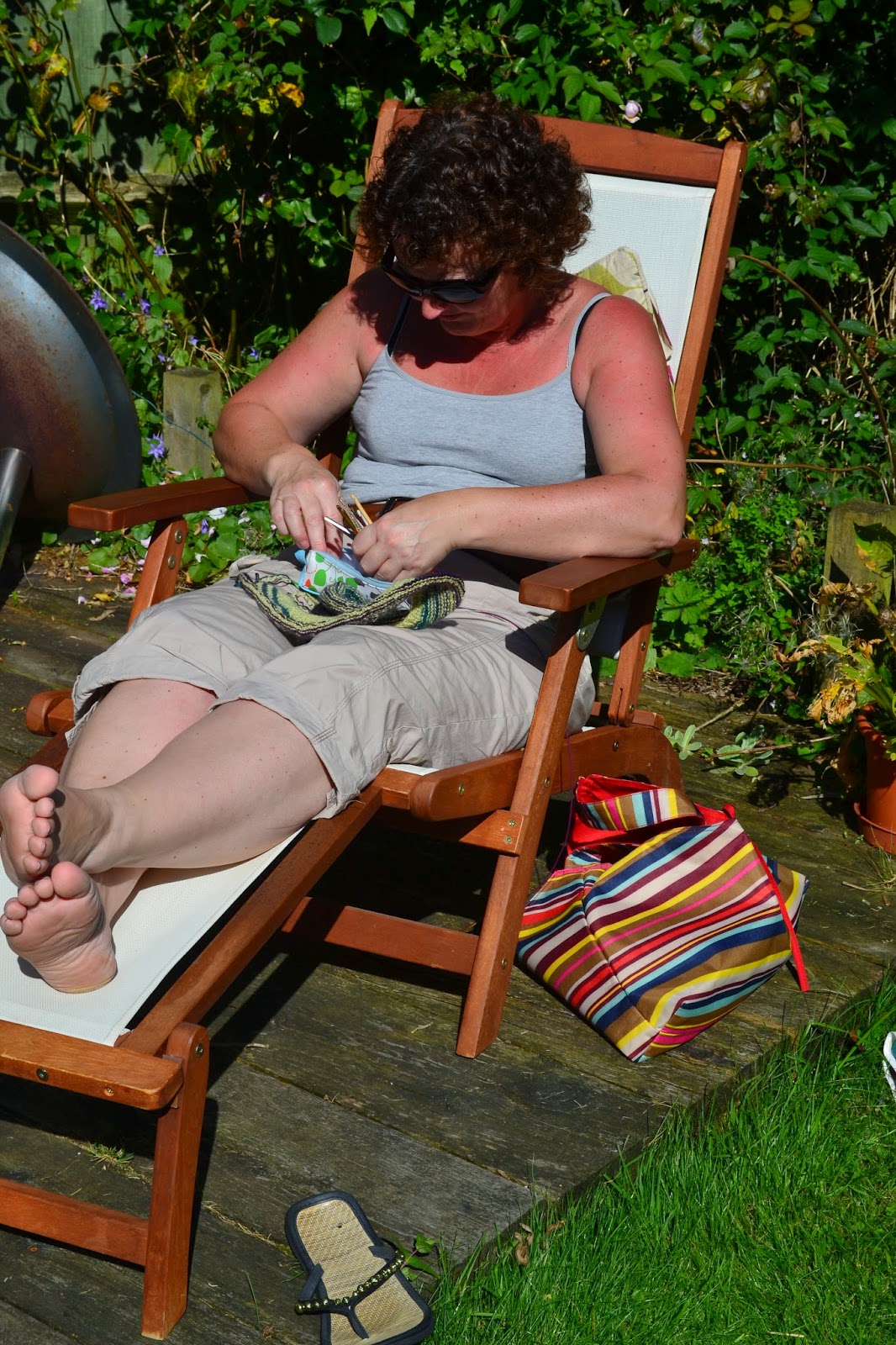 Tipper joined me in the sunshine. 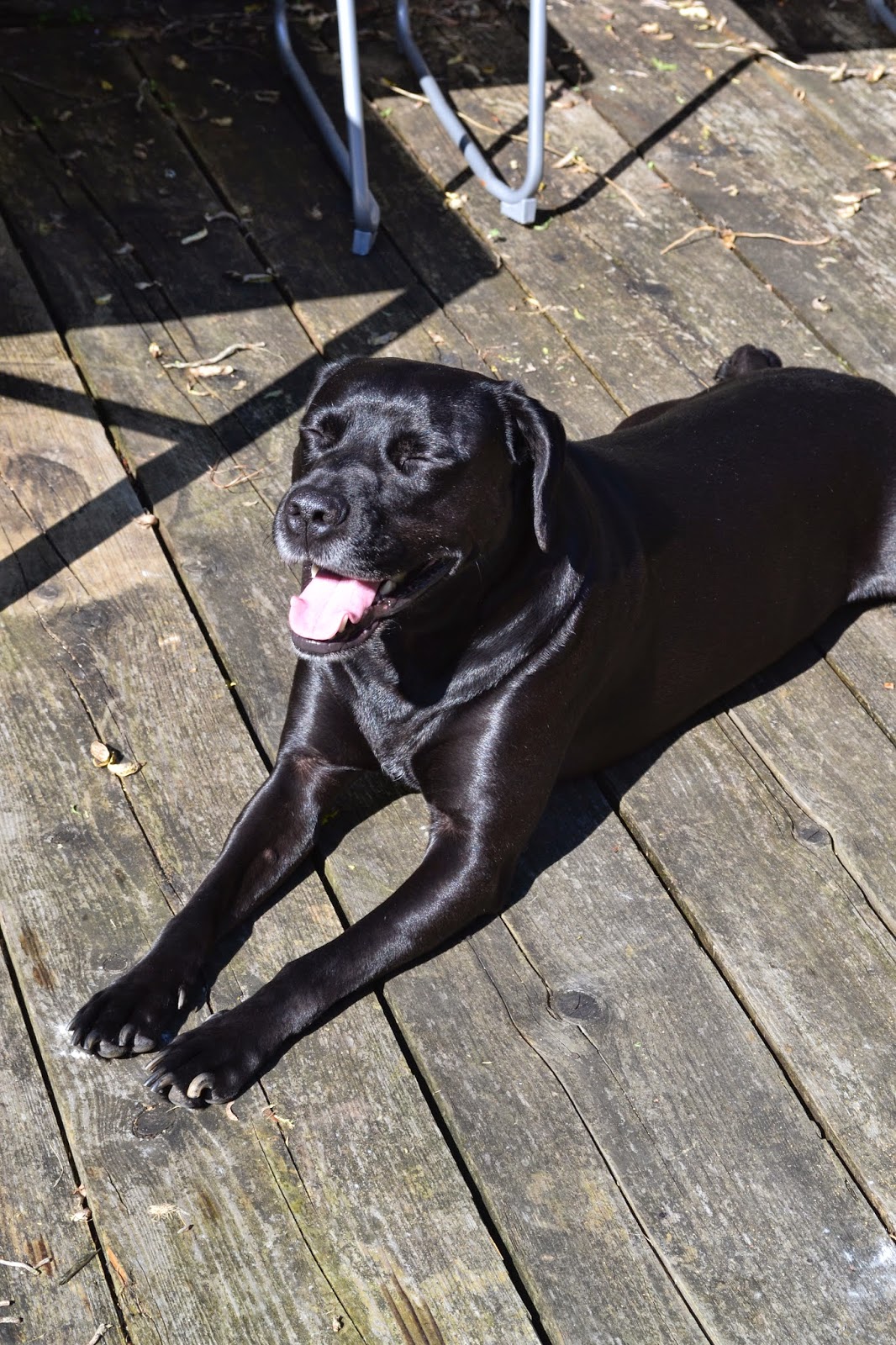 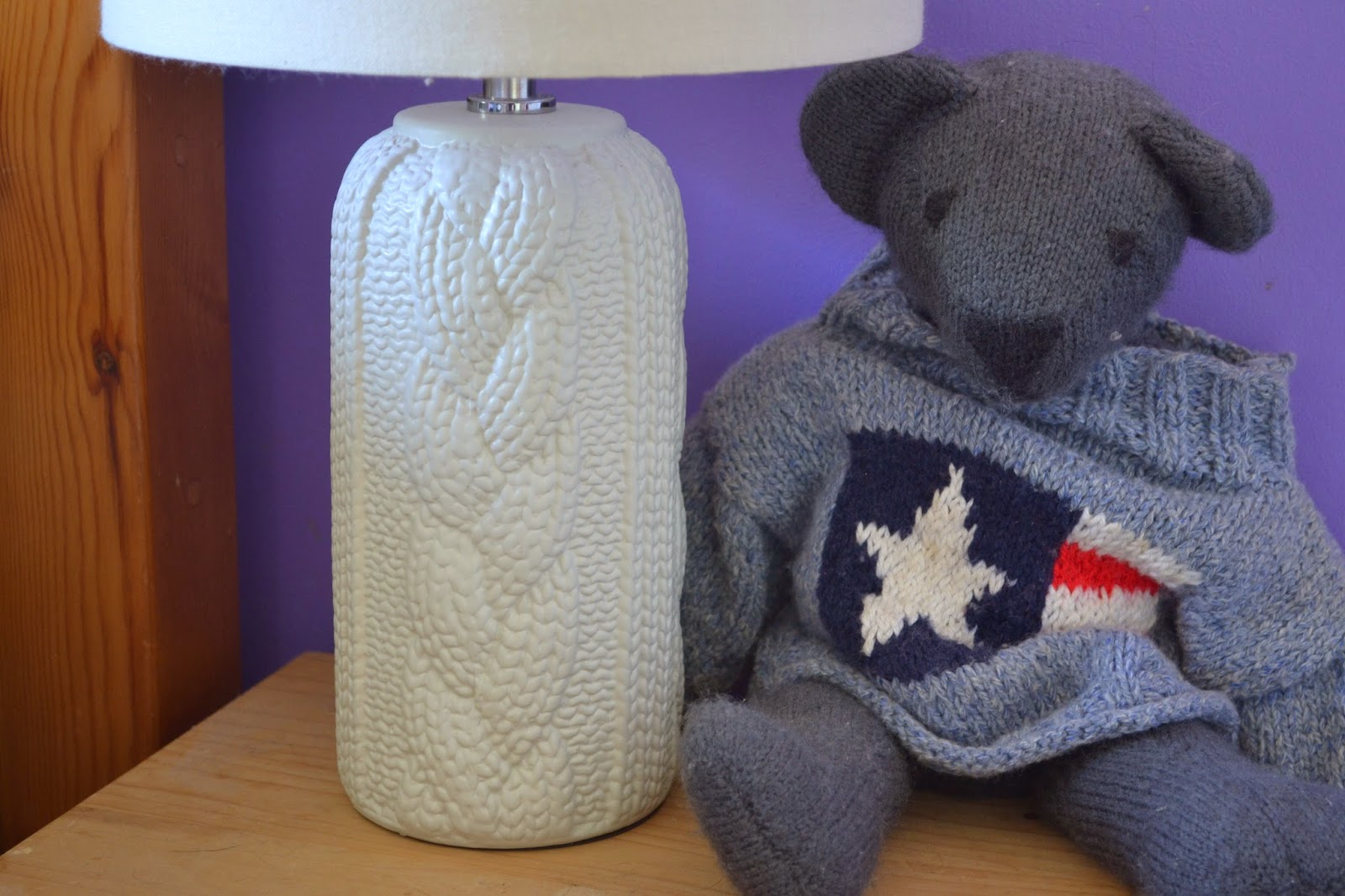 School is back in full swing, and the germs and bugs are being passed around.  3 of our teachers have been ill with colds this weekend!

That's me for now, let's hope this lovely sunshine continues.