A bit of Sunshine

We've had some sunshine for the first day of spring.  I popped some bellis in a pot by the front door, they are looking very cheery. 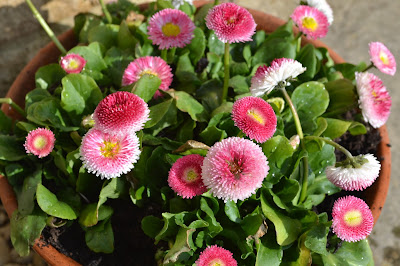 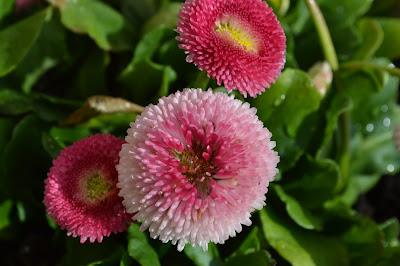 Which unfortunately, can't be said of me.  I have had a return of the lurgy that I had last weekend.  It has been going around school.  One day last week we had 10 children out of our class!   It was a blocked nose/sore throat/ sort of lurgy which left me very low on Friday and yesterday but thankfully, I'm livelier today.

I treated myself to a hot choc this morning made with Chocolate Charbonnel and a marshmallow melt.  They were both a birthday present from my mum and I had the last marshmallow today.  Oh! it was heaven.  Thanks Mum. 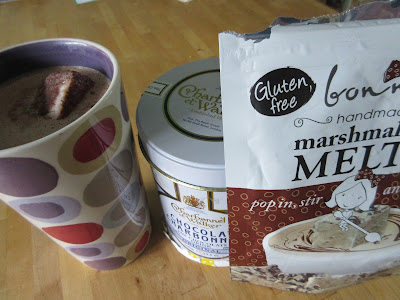 As I was grotty I sat and knitted and watched England win the Six Nations Rugby.  I finished one arm of my Driftwood and I'm halfway down the other.  I was trying to do the sleeves on a circular needle but wasn't really getting on that well, so I did a quick Amazon click and new set of double pointed needles arrived a few days later.  The sleeves are flying off the needles now. 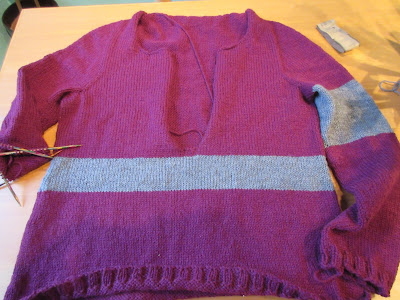 We've only one week to go until the Easter holidays at school.  Me and Mr Clicky are off to France over Easter weekend.  Let's hope there aren't too many others with the same idea!

I thought I'd start off by showing my Mother's Day Flowers Miss Clicky bought me.
Red and yellow tulips.  Lovely.
They were a bit floppy however, so I pricked them behind the flower head with a pin and put some sugar for food in the water. 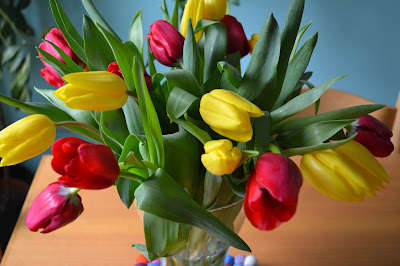 When I came downstairs this morning they were standing up straight in the sunshine. 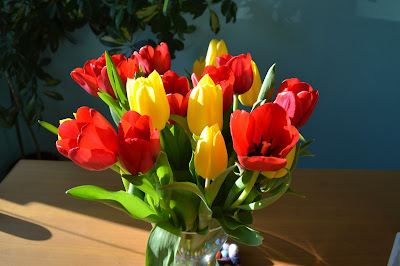 I spent Mother's Day painting the en-suite.  It has been virtually finished, the plumber has to come back to put in the towel rail and two lights around the mirror.   Mr Clicky is banned from painting so it is my job.  After we brought the tin of newly mixed paint for the bathroom, he opened it, we looked at the colour and put the lid back on.  Whilst putting the lid on he got paint all over his hands and then splattered it up his coat and jumper.  He is no better with a brush in his hand, there's more running down his arm than going on the wall so, no more.

I'll show some pictures when the bathroom is fully complete.

I have been knitting white a lot too.   This is my Driftwood by Isabell Kraemer.  The pattern is stripy, I am making mine plain with some colour blocks.    As it's a double knit rather than the 4ply cardi I made a while back, it's moving fast. 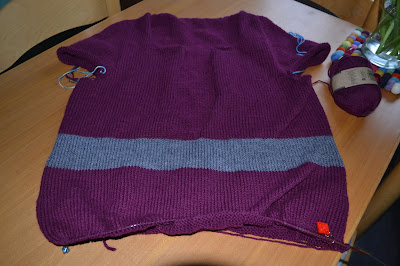 The pattern had the lovely 'contiguous' set in sleeves and are a joy to work.  The yarn ~ Drops Lima was last year's Christmas  Present from Mr Clicky, so I'm pleased to be using it up. 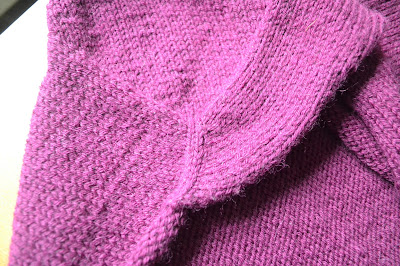