It's really warm!  We're in the amber weather warning area.  The last few days have been too much.  I've even allowed the pigeons to bathe in my water feature, I usually chase them off because the water goes quite scummy from the grease on their feathers. 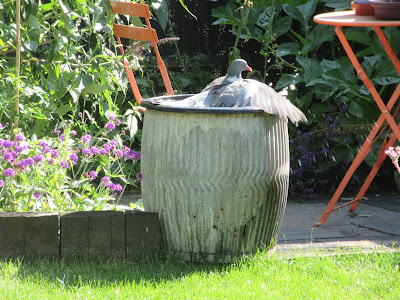 We're all needing lots of water at the moment. 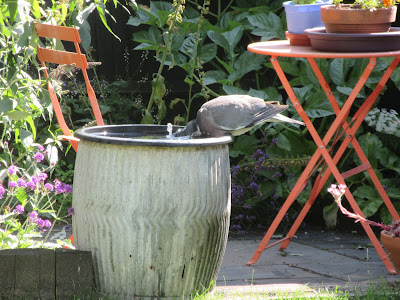 I have been making bugs and butterflies as part of a project run by The Nelson Trust, to signify the end of isolation (lockdown) and encourage community spirit.  Of course there might be another lockdown, but let's focus on the positives.  The Nelson Trust work within the South West to support people with addiction and also women and girls who become involved in the criminal justice system.

I saw a post of Facebook inviting to take part in the 'Crafty Collaboration' and thought it might be fun.  The aim is to make a wallhanging.  They sent out packs with everything needed; crochet flowers, beaded bugs or embroidered butterflies.

As I have never beaded anything before, I thought that bugs might the one to try.

I used plates to keep the beads separate and got to work. 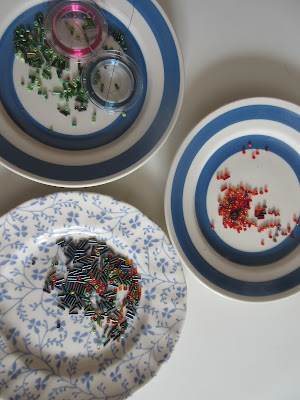 At first it was tremendously fiddly but as I got the hang of it, I got better.  It involved threading the very fine wire through the row of beads and then back on itself.  I made five bugs, they are about 4cm long. 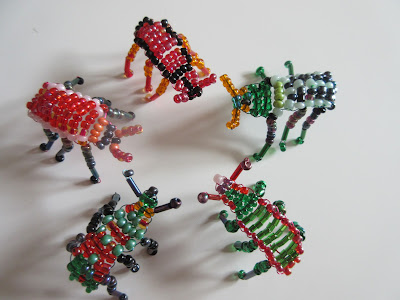 They really shimmer in the light. 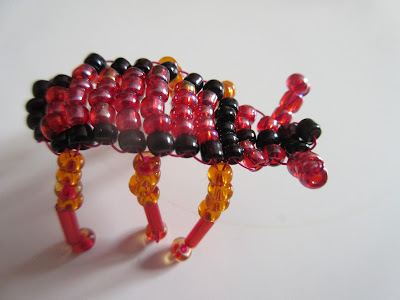 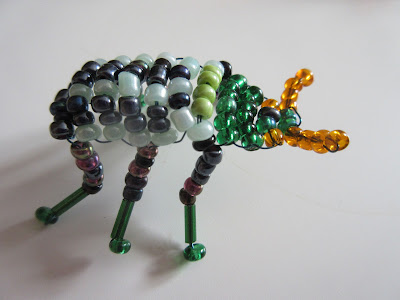 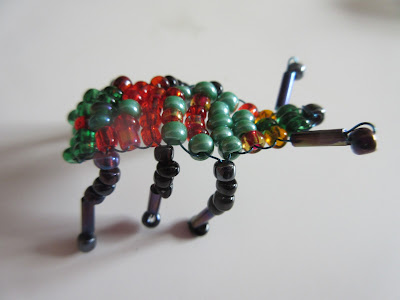 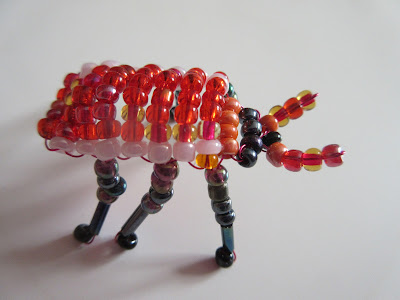 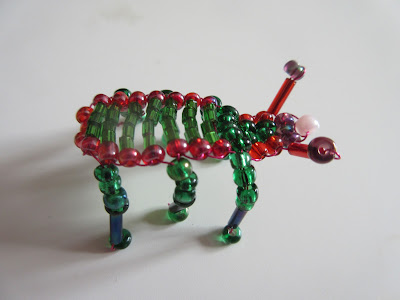 I also embroidered a butterfly.  The base was stiff felt; I tried to make it as symmetrical as I could.  This was about 10 cm across.   I have handed them all in and have volunteered to be a part of the 'making up team' to produce the wall hanging. 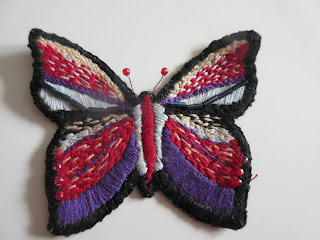 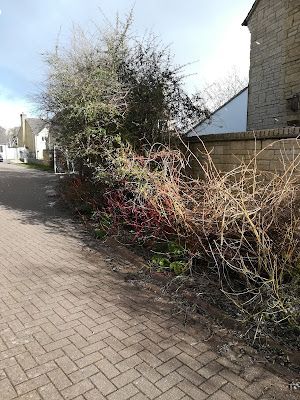 to a fragrance filled garden.  Other than the dahlias on the end, I grew all of this from seed. 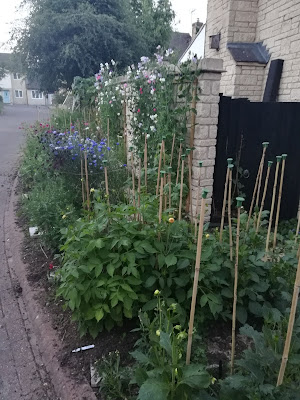 Things were a little slow to get going after the cold spring we've had but are now in full flow; the sweet peas are really happy, although they are quite a pastel selection, next year they will be more brights. 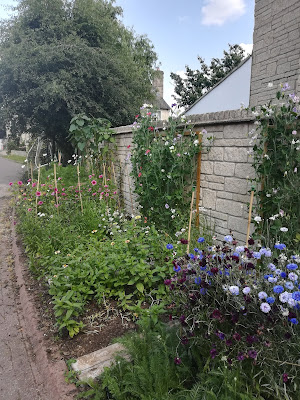 I pick a bucketful every evening. 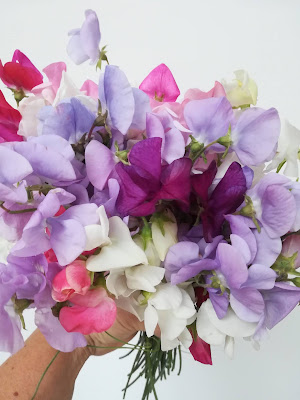 I made a wooden planter to fit in the gap between the end of the raised bed and gate. 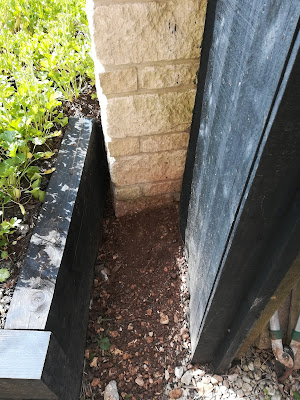 I've planted this with three loofah plants which I grew from seed, one has been munched by the snails but I'm keeping my fingers crossed for the other two, I'll keep you posted. 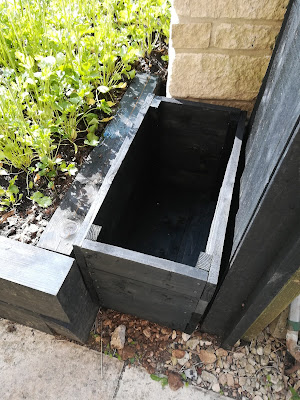 My neighbours are getting used to a knock on the door and flowers being thrust at them.  I shall have to accost strangers on the street soon. 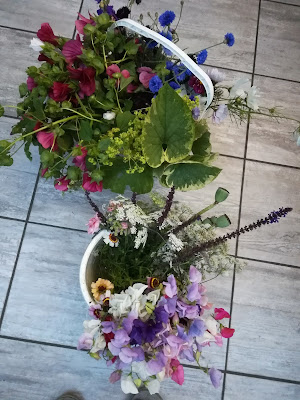 I am not so much of a fan of the arranging, I go for the 'thrown together' look but the smiles on people's faces make it worthwhile. 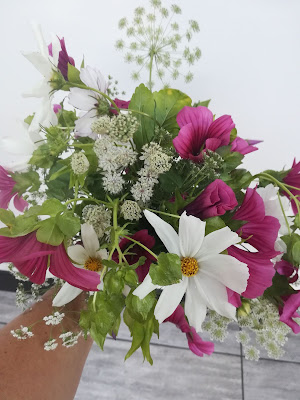 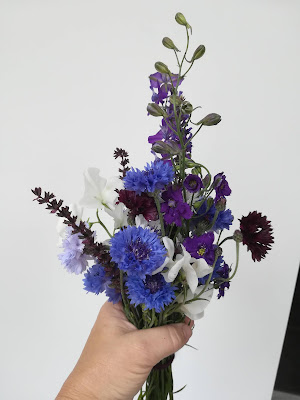 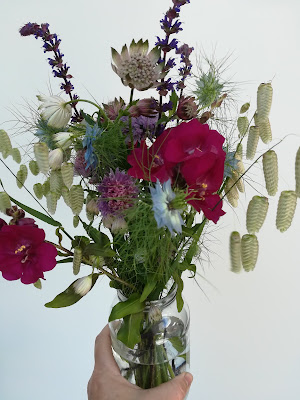 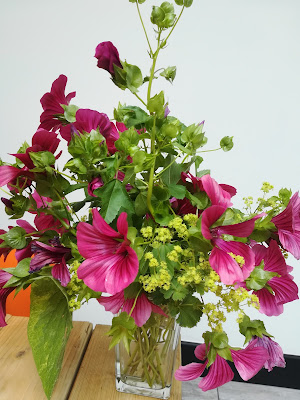 That's me for now, we have been 'promised' thunder storms this weekend but we'll see, the storms didn't come last time they were predicted.  I'm just hoping for a drop in temperature.
Keep safe and hydrated........Clicky Needles.