I'm back after a little absence, not particularly planned but sometimes I just don't have much to say.

When we last spoke the world was ticking along fairly well.  The pandemic was getting better, or we could live with it better and things seemed to be looking up.  Of course that all changed on Thursday 24th February when Putin decided it was a good idea to invade Ukraine.  The initial horror and then sadness for both sides, Russian troops and conscripts who didn't even know they were at war, for me has now turned into anger and hatred for the Russian 'army' who are not only it seems killing anyone they fancy, but also committing horrific atrocities.  The Ukrainians are defending their country with ferocity.  I am just hoping it all ends soon, but I fear it won't.

My Year in Stitches hoop is a quarter done, I had no idea that I would be adding things like war, invasion, refugees and a B52 bomber, which are once more flying from Gloucestershire and patrolling the skies in Europe.

I am loving making this but it is a massive undertaking, not so much the sewing, but finding something to sew every day. 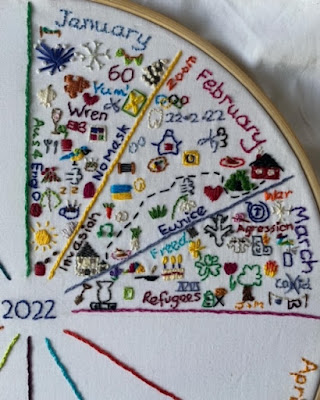 I sat in the sunshine yesterday and tidied up my thread box.  The local craft shop sells mixed skeins of threads with lots of colours cheaply, so I have been separating the colours out and winding them onto bobbins. 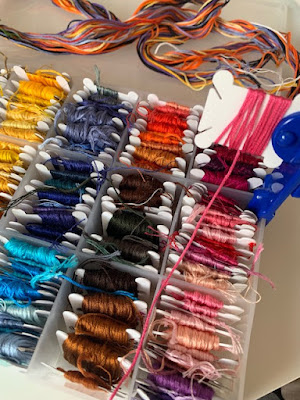 It looked much better after I had finished. 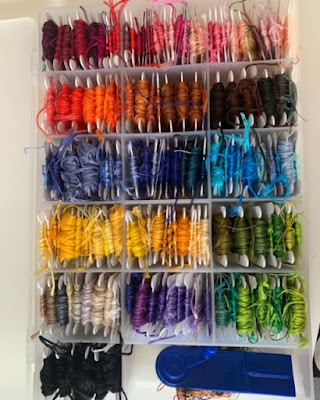 Last week my lovely cousin came down from London to stay for a few days.  We visited Kelmscott Manor in Oxfordshire, William Morris' country retreat which he described as 'Heaven on Earth.'   It was indeed, heavenly.

A beautiful building on the outside it was equally lovely inside. 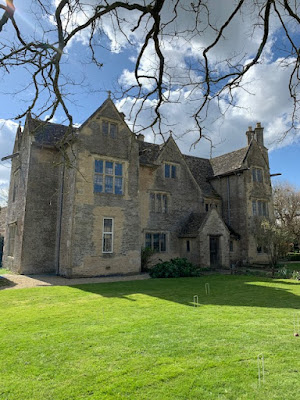 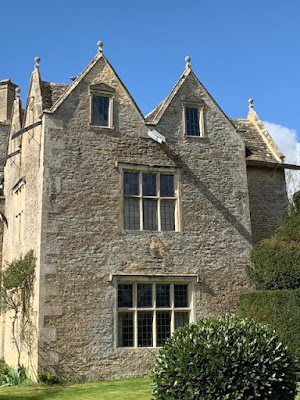 I would love to sit here in this light filled room and stitch a tapestry.  The hangings on the wall behind are original, faded now but they were once the most vibrant blue. 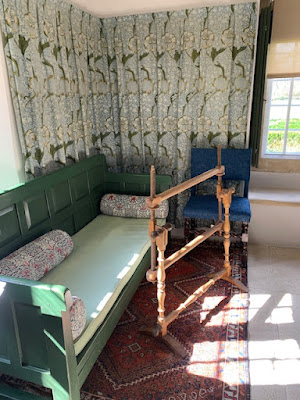 The tiles on the fireplace were also blue. 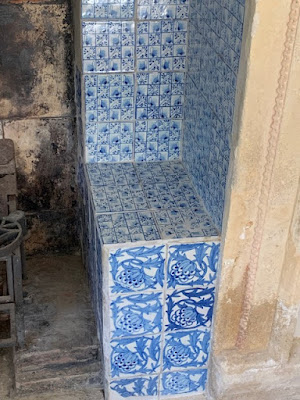 With every turn there was another stunning wallpaper or fabric; there were lots of 'oos and ahs.'  It's amazing to me that William Morris started printing wallpaper in 1891.  It really hasn't dated. 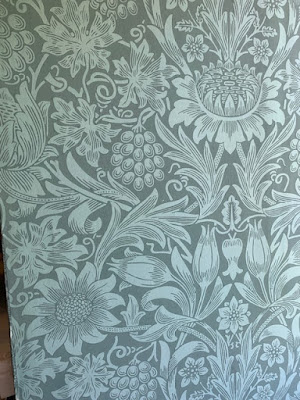 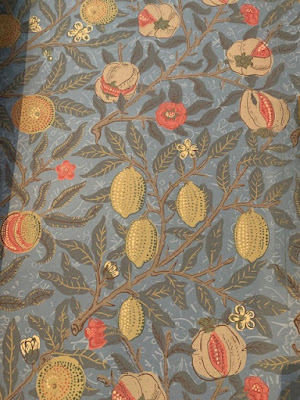 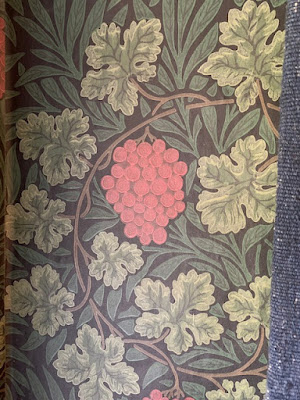 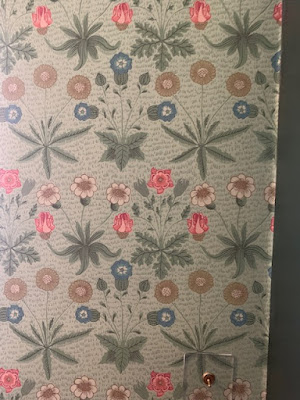 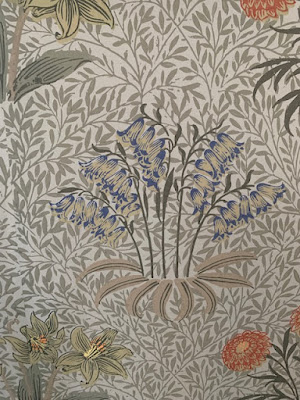 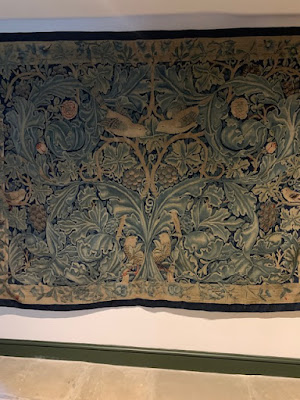 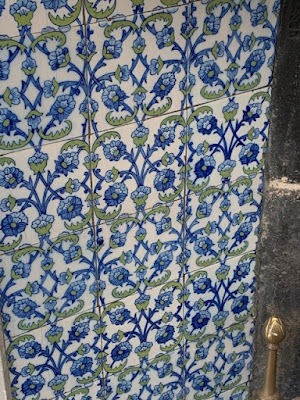 You can go right into the attic to see the bones of the building. 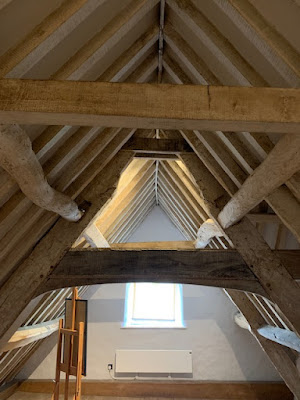 This room had a really great feel and we both decided we could stay in it. 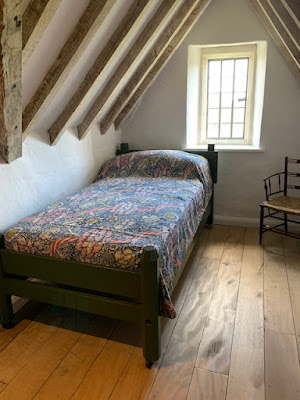 The gardens are just starting to come into spring. 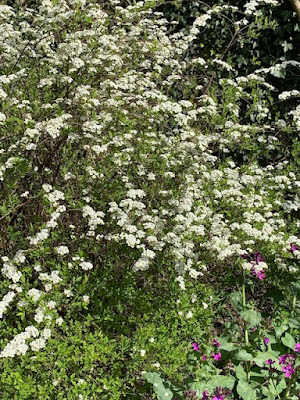 Of course we stopped for a cup of tea and cake, and there were even wall hangings in the (barn) cafe. 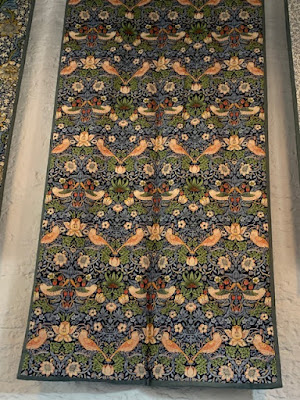 We wandered back through the village of Kelmscott to the car feeling restored. 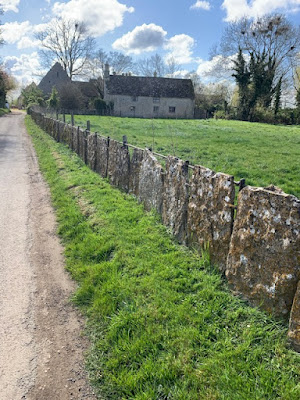 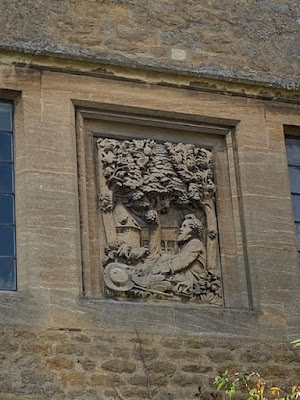 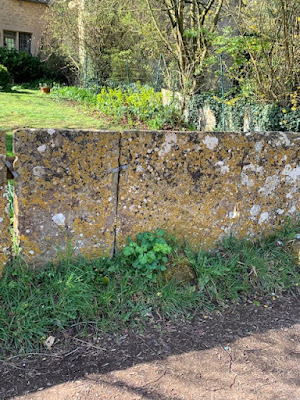 Such a lovely place, if you get the chance it's well worth a visit.

That's me for now, I'm off for a cuppa and to catch up on your news.